As India beat Australia to win the series, Union Minister Babul Supriyo was reminded of his infamous tweet on Hanuma Vihari and had a fiery response 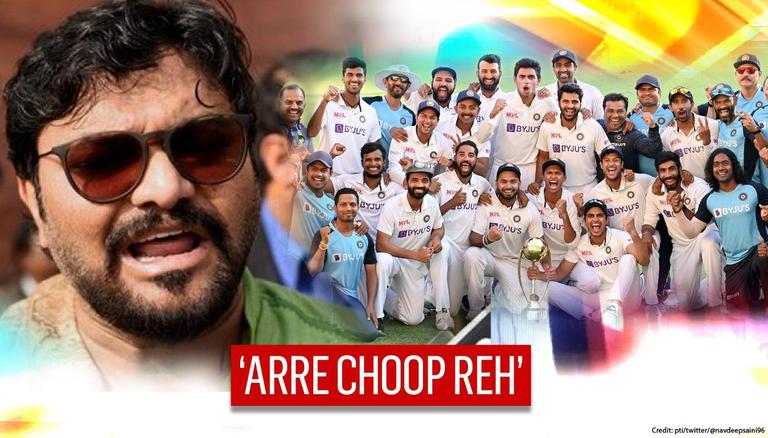 There was one reaction that had become a talking point when India managed to save the third Test against Australia a few days. Union Minister of State Babul Supriyo had expressed his displeasure over Hanuma Vihari ‘murdering cricket’ as he played for a draw instead of attempting to win the match. As the Bharatiya Janata Party leader praised India for the victory in the fourth Test, a netizen reminded him of his infamous tweet, leading to an interesting response.

READ: After Vihari Tweet, Babul Supriyo Has Message For Shardul-Sundar Partnership; Others React

Babul Supriyo’s message on India’s victory was mainly for Rishabh Pant, who played a match-winning innings of 89*. The singer-politician used wordplay to state that ‘Gabbar’, the popular villain from the film Sholay was out at the Gabba and his name was Rishabh Pant.

Using terms like ‘Fortune favours the Brave & HOW' , he wrote how the ‘so-called inexperienced team' had burnt Sholay (fire) in the hearts of 135 crore Indians. Praising coach Ravi Shastri, he termed it as a ‘hair raising feat’.

However, one netizen reminded him of his tweet on Hanuma Vihari last time and said, "First you talk about Hanuma Vihari. You don’t know to watch cricket and are trying to become a hero’'

Supriyo clapped back at the troll and asked him to ‘shut up’. He asked, "Are you stil stuck on the third Test, is your life that boring?”

Opener Shubman Gill (91) and Cheteshwar Pujara (55) were among the other star performers on day 5. Their 124-run partnership proved to be the difference as it took the game away from the Aussies. Quickfire cameos by Rahane (24) and Sundar (22) also turned out to be crucial.

India made it back-to-back series victories Down Under after their historic victory under Virat Kohli's captaincy in 2018-19. The series win was aided by numerous star performances including the partnerships between Cheteshwar Pujara and Rishabh Pant and Ravichandran Ashwin-Hanuma Vihari in the third Test, Ajinkya Rahane's century in the second Test, Mohammad Siraj's five-for in the fourth Test and Shardul Thakur-Washington Sundar's partnership in the fourth Test

READ:Hanuma Vihari Responds To Babul Supriyo After He Accused Him Of 'murdering Cricket'