Team India on Monday displayed yet another fightback and defeated England by 157 runs in the fourth Test and took 2-1 lead in the five-match series at the Oval. 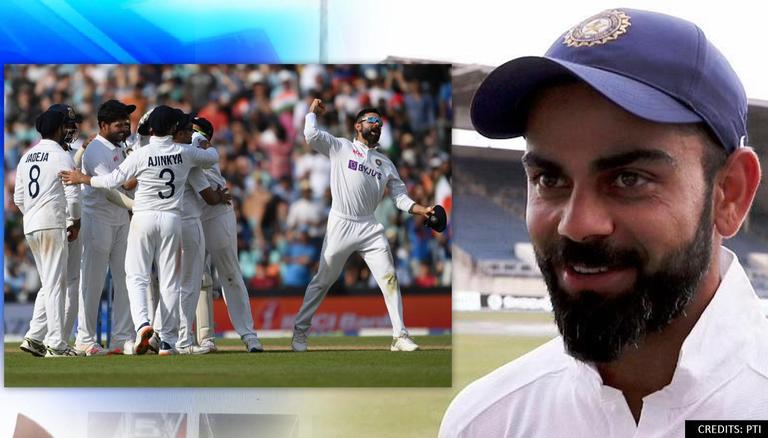 
Team India on Monday displayed yet another fightback and defeated England by 157 runs in the fourth Test at the Kennington Oval. After suffering a horrific loss at the Headingley, Team India skipper Virat Kohli had expressed that his team is capable of making a come back and the Oval Test indeed became a live example of his belief. During the presentation ceremony, ecstatic Virat Kohli lauded the bowling performance of the team on Day 4 of the Oval Test and termed it among the 'best three performances' he has ever witnessed.

Speaking at the post-match presentation, Virat Kohli outlined the brilliant bowling spell of Jasprit Bumrah and also lauded the squad for showing a great fighting character during the fourth Test.

"The bowlers were good with the reverse swing today. We believed we could get all 10 wickets, we had the belief. As soon as the ball started reversing, Bumrah himself asked for the ball. He bowled that spell and swung the game in our favour with those two huge wickets," added Kohli.

Talking about the brilliant all-round performance of Shardul Thakur, Virat Kohli said, "What Shardul has done in this game stands out; his two 50s deflated the opposition. I think he batted well in both innings."

Kohli also responded to the criticism he has been facing over the non-selection of Ravichandran Ashwin.

The skipper said, "We never go towards analysis, statistics, and numbers. We know what we need to focus on and we take a collective decision as a group. It gives us more motivation to win the next Test. We have the belief, we are just looking forward to the opportunities."

The fifth and final Test will take place in Manchester from September 10.

Coming back to the match, it was a perfect team effort. In terms of bowling, speedster Jasprit Bumrah's spell put England at backfoot as he knocked over Ollie Pope and Jonny Bairstow. Chasing 368 for a win, England were positioned nicely at 131 for two in the opening session but lost six wickets in the middle session with Bumrah and Jadeja wreaking havoc on the fifth and final day of the game.

The hosts were eventually all out for 210 to hand India a 2-1 lead in the five-match series. England lost six wickets for 62 runs in the second session and were all out in the post-tea session. Bumrah dismissed Ollie Pope (2) and Jonny Bairstow (0) while Jadeja saw the back of Haseeb Hameed (63) and  Moeen Ali (0).