As India Celebrates 14 Years Of Maiden T20 World Cup Win, A Peek Into The Enthralling Win

14 years ago, on this day India won the inaugural edition of the ICC T20 World Cup by defeating Pakistan in the final at the Wanderers in Johannesburg. 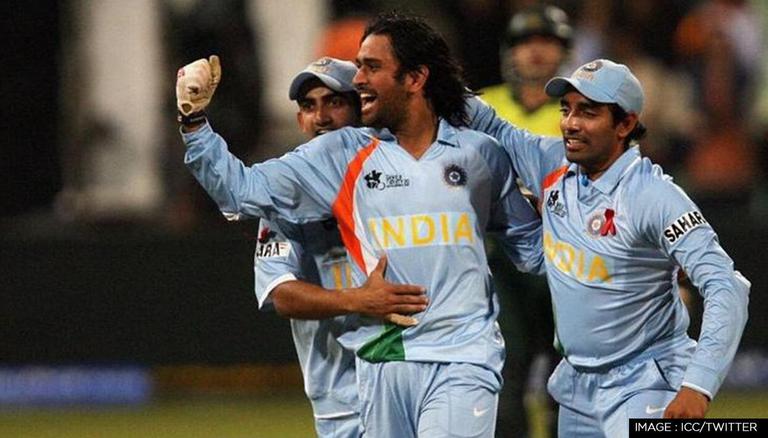 
Fourteen years ago, on this day, the Indian cricket team, under the captaincy of legend MS Dhoni, won the inaugural edition of the ICC T20 World Cup on September 24, 2007, by defeating Pakistan in the finals at the Wanderers stadium in Johannesburg, South Africa. India defeated arch-rivals Pakistan by five runs in the finals to emerge as the winners and clinched the maiden World T200 World Cup title. In the final showdown, India opted to bat first after winning the toss and set Pakistan a target of 158 runs. During India’s batting, Gautam Gambhir top-scored for India by amassing 75 runs off 54 balls. India’s first innings score reached 156, courtesy of a quick-fire innings by youngster Rohit Sharma, who scored 30 runs off just 16 balls.

In the second innings of the match, Pakistan opener Mohammad Hafeez returned to the pavilion after being dismissed at the individual score of just 1 run of 3 balls. The other opener Imran Nazir, however, helped Pakistan’s side by scoring 33 runs before getting run-out by Robin Uthappa. Pakistan looked like going for the win as they needed only 13 runs off 6 balls to win the World Cup with an experienced Misbah-ul-Haq on the crease batting at 37 runs off 35 balls.

However, the final over of the match saw tables turn as bowler Joginder Sharma conceded a wide on the first ball and then got hit for a six by Misbah that went straight back down the ground. With just six runs needed to win the match in four balls, Misbah went for the scoop shot over the fine-leg. The ball went straight up in the air and S Sreesanth took the iconic catch to send back the last batsman of Pakistan from the crease. India emerged victorious courtesy of a brilliant bowling effort by the bowlers. Irfan Pathan and RP Singh took three wickets each while Joginder Sharma took two wickets and Sreesanth dismissed one batsman.

Watch the dismissal of Misbah-ul-Haq-

The @msdhoni-led #TeamIndia created history as they lifted the ICC World T20 Trophy. 🏆 👏

In his first assignment as the captain of team India, MS Dhoni became the first captain after Kapil Dev (1983 World Cup) to win a World Cup title for India. He went on to become the most successful Indian Captain by winning the ICC 50-over World Cup in 2011 and the ICC Champions Trophy in 2013. The T20 World Cup 2007 final is remembered for a young Indian team, who against all the odds brought the maiden T20 World Cup trophy home.

India claimed the first ever @T20WorldCup trophy #OTD in 2007 🏆 pic.twitter.com/ySKx6NyO1J