'As Long As...': ICC Clears Stance On Michael Neser's Controversial Catch In BBL

The incident took place in the 19th over of the second innings when Neser completed a sensational catch to dismiss Sydney Sixers batter Jordan Silk. 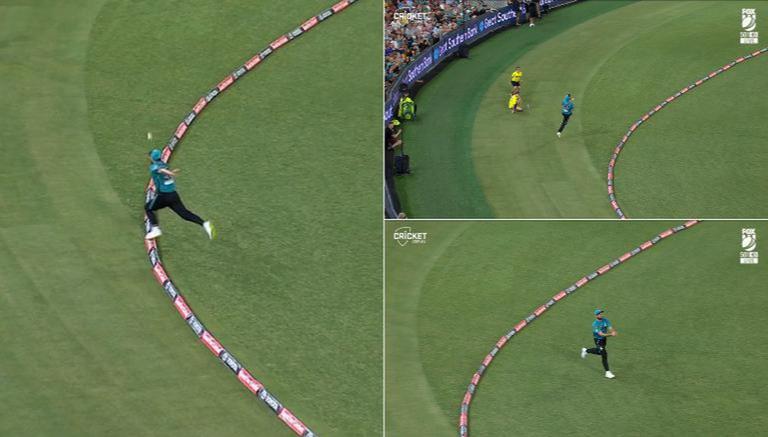 
Michael Neser on Sunday garnered all the limelight during a Big Bash League (BBL) match between Sydney Sixers and Brisbane Heat. During the game, Neser took a juggling catch near the boundary rope, which became controversial and stirred a debate in the cricketing world. The incident took place in the 19th over of the second innings when Neser completed a sensational catch to dismiss Sydney Sixers batter Jordan Silk.

Neser, who was guarding the extra cover region, took the catch near the boundary rope and went over the fence. Neser tried to flick the ball back inside the play area before going over the rope but failed to do so and once again tried to chip it back before taking the catch. When Neser flicked the ball for the second time, he jumped in the air and jumped back inside the play area to complete the catch. The TV umpire checked the replays and decided to give it OUT.

However, the catch created a controversy with many people saying that umpires shouldn't have given it OUT. Meanwhile, the International Cricket Council (ICC) has now given its verdict on the controversial catch, saying that it was well within the laws of the game. The Marylebone Cricket Club (MCC), which is the custodian of the game, has also said that the catch was legal. MCC stated that the first contact must be inside the boundary and the fielder can't be touching the ball and the ground beyond the boundary at the same time.

👏 Quite a few questions have emerged following this outstanding bit of fielding in the @BBL.@Gmaxi_32 provides expert commentary as to why this indeed was Out.

See here for the Law: https://t.co/A1dNCFU9vo#MCCLawspic.twitter.com/OppIx2ufa6

The key points are:

1) The FIRST contact must be inside the boundary, and

2) the fielder can’t be touching the ball and the ground beyond the boundary at the same time.#MCCLaws

As far as the match is concerned, Brisbane Heat won the toss and elected to bat first at the Gabba Stadium. Batting first, Brisbane Heat scored a mammoth 224/5 in 20 overs thanks to an 84-run knock from Nathan McSweeney. Josh Brown also contributed with 62 off 23 balls. In reply, Sydney Sixers could only manage 209 runs on the board before being bowled out by the Heat. Josh Brown was named the player of the match for his outstanding innings.