Australia women vs India women: Jemimah Rodrigues was in top form as she hit 49 off 36 before rain ruined it for the Indian team and the match was called off. 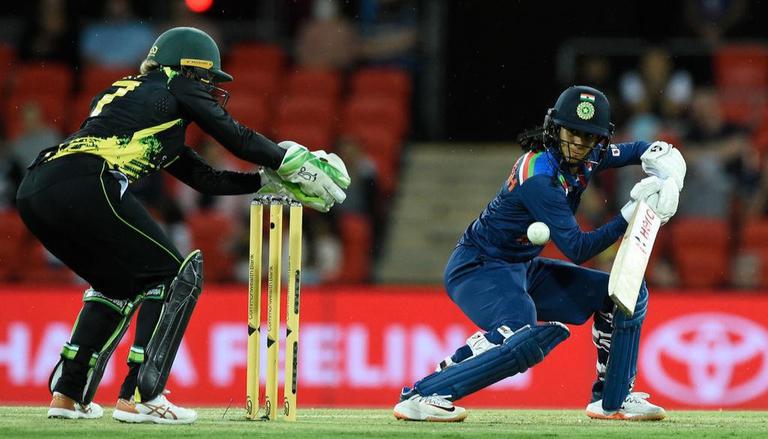 
The first T20I at the Metricon Stadium in Queensland's Carrara Oval between India and Australia was called off owing to a heavy downpour just as India's innings was starting to gain momentum. Australia won the toss and chose to bowl, and the Indian team got off to a jittery start after losing Smriti Mandhana and Shafali Verma in the fourth over. However, Jemimah Rodrigues made her comeback to the team and ensured everyone remember her brilliant shots to help India reach 131 in 15.2 before rain played spoilsport.

Rodrigues was in top form as she smashed 49 off 36 before rain ruined it all for the Indian team and Rodrigues who missed out on her half-century by just a run. While the Indian openers started well, Ashleigh Gardner came into the attack and took both of them out in the same over. At one stage India was 55 for 3 and things looked to be going the Australians' way. Then came in Rodrigues who completely turned the innings over its head as she expressed herself really well with the bat. She had good support from Yastika Bhatia before she had to make her way back to the bench.

Fans absolutely loved the performance from Jemimah Rodrigues with some asking for her to be included in the 50 over team as well. Take at the best posts from Twitter:

READ | IND W vs AUS W: Punam Raut walks off field giving herself out despite umpire's 'not out'

Jemimah must get into the odi side. You just cannot keep her out of the wc. There is a spot in the middle order if one tries to explore

Rain plays spoilsport after Indian batters shine.
A play on words when no play to be had 😅

Rough on Jemimah Rodrigues to end on 49*, but what a statement on her India comeback.
Over to Saturday now and hope this momentum continues. https://t.co/qfT21fiWGF

Collective aggression from India took them a competitive total before 🌧️ stopped play and ended their innings.#AUSvIND pic.twitter.com/PRBnIERdcn

#AUSvIND Jemimah Rodrigues deserved that half century. Her innings ends on 49 due to rain. She looked in great touch right throughout and carried her form from the Hundred. Still surprised that she wasn’t featured in the ODI series. pic.twitter.com/KxmSlcRo88

Great batting performance from the Indian girls against AUS in 1st T20I.
Jemimah's excellent knock of 49* off 36 helped IND reach 132 in 15.2 overs (Rain stopped play)
If rain stops in next 40 mins, it'll be a 5-over-chase for AUS. #AUSvIND

Oh no, India's innings finish due to rain which means Jemimah is not out on 49😟 Well played Jemi, I'll still take that as a half century😇#AUSvIND

I don't follow women's cricket often but the last time I saw tweets relating jemimah Rodrigues,ppl were like she shd stick to doing tiktok videos,today all applauding her

Jemimah Rodrigues becomes only the 4th Indian woman to score 1,000 runs in T20Is 🌏

After her stellar performance, Jemimah Rodrigues became only the fourth woman to score 1000 runs in T20Is and the second fastest to 1000 runs doing so in 41 innings among Indian women after Mithali Raj who reached the milestone in 40 innings.

The final leg of the ongoing tour Down Under comprises three T20Is which will be played on October 7, October 9, and October 10, and the venue for all the games remain the same. And with rain ruining the first match, India will be hoping to win the other two games so that they can win the multi-series as currently, Australia are in the lead 7-5.

READ | Ind W vs Aus W: Spirit of cricket debate reignited as Raut walks off despite given not out