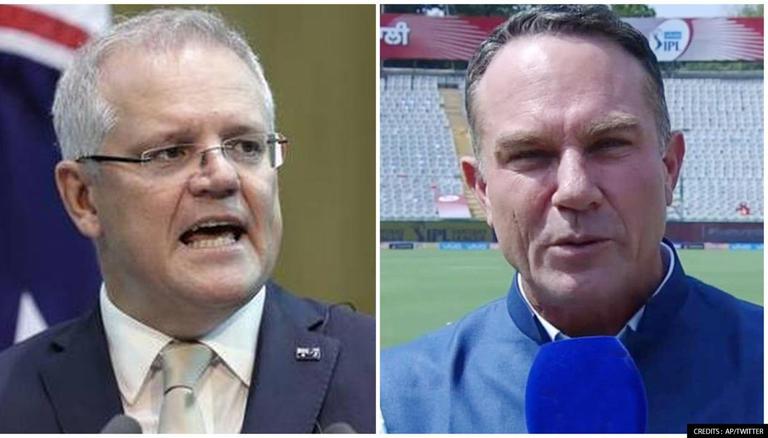 Expressing his displeasure, Michael Slater had tweeted, "If our Government cared for the safety of Aussies they would allow us to get home. It’s a disgrace!! Blood on your hands PM. How dare you treat us like this. How about you sort out quarantine system.”

Reacting to Michael Slater's 'blood on your hands' remark, Australian Prime Minister Scott Morrison termed it absurd. "No, that’s obviously absurd,” PM Morrison told Nine Network, reacting to Slater's comment. Morrison even said that fining or jailing those who make their way back from India to Australia somehow was highly unlikely. He also defended his decision to impose travel ban from India. "The buck stops here when it comes to these decisions, and I'm going to take decisions that I believe are going to protect Australia from a third wave," said Morrison.

Scott Morrison also indicated that flights could begin soon after May 15 and he is working to bring stranded Australians in India back to their homes. "I'm working to bring them home safely," said Morrison.

After Scott Morrison called Michael Slater's remark absurd, the former Australian cricketer continued his criticism of the Prime Minister of Australia. Michael Slater took to his Twitter handle and asked Scott Morrison to take his private jet to India and see the scenario. Slater also highlighted that the fear among the Australian players and support staff is real.

As many as 40 Australians, including players, coaches and support staff members are stranded in India after the latest edition of the cash-rich league had to be postponed indefinitely. As per the new measures taken by the Australian government, travellers who have been in India within 14 days are banned from entering the Australian borders.

A record 3,780 fresh COVID-19 fatalities were registered in a single day in India taking the death toll to 2,26,188, while 3,82,315 new coronavirus infections were recorded, according to the Union Health Ministry data updated on Wednesday. With the fresh cases, the total tally of COVID-19 cases in the country climbed to 2,06,65,148.

Registering a steady increase, the active cases have spiked to 34,87,229 comprising 16.87 percent of the total infections, while the national COVID-19 recovery rate was recorded at 82.03 percent, the data updated at 8 am showed. The number of people who have recuperated from the disease surged to 1, 69,51,731 while the case fatality rate has further dropped to 1.09 percent, the data stated.