The 'babysitting' jibe by Paine to Pant, which kicked off the banter, became viral, so much so that the Indian took it seriously and ended up actually babysitting Paine's kids

For all the suggestion that the sledging during the Boxing Day Test between Australia and India will deteriorate the relationship between the two set of players, the ground reality is completely different ahead of the fourth Test.

Australian skipper Tim Paine and Indian wicketkeeper Rishabh Pant were at the forefront of the sledging/banter, and while it seemed it was serious when it took place, the players' reactions post the game suggests it's all fine.

The 'babysitting' jibe by Paine to Pant, which kicked off the banter, became viral, so much so that the Indian took it seriously and ended up actually babysitting Paine's kids. And taking cue from that, Amul, knowing for their hilarious and creative posters, came up with a graphic which will leave the world in splits.

The whole episode began during the second innings of India's batting during the third Test in Melbourne. In reference to the inclusion of MS Dhoni in India's ODI squad, which saw Pant being dropped, Paine, standing behind the stumps, took the opportunity to have a go at the batsman using his witty comments.

"Tell you what big MS is back in the one day squad. Should get this bloke down to Hurricanes. They need a batter. Fancy that extend your Aussie holiday, beautiful town Hobart too... get him a water front apartment," he said before adding, "Have him over for dinner. Do you babysit? I can take my wife to the movies while you watch the kids."

Tim Paine doing some recruiting for the @HurricanesBBL out in the middle of the 'G... 😂 #AUSvIND pic.twitter.com/6btRZA3KI7

WATCH: Rishabh Pant Gives Tim Paine A Taste Of His Own Medicine, Mocks By Calling Him 'Temporary Captain' Who Only Knows Talking'

But Pant did not hold himself back, and roasted the Aussie when he was batting. He made some hilarious remarks on the Australian skipper while speaking to Mayank Agarwal.

"We've got a special guest today, come on boys. Special appearance today boy, come on. No responsibility there from captain. Running away, always running away. Too difficult, too difficult," he said before adding, "Have you heard of the word, a 'temporary captain', ever? I am seeing it. You don't need anything to get him out. He loves to talk, that's the only thing he can do. Only talking, talking."

Rishabh Pant continued the chatter behind the stumps with Tim Paine at the crease.

But on Tuesday, when the two teams were part of the meeting with the Australian Prime Minister Scott Morrison, the episode became funnier than ever, and suggestions of bad blood ended.

Tim Paine's wife Bonnie Maggs joined in the banter, and instead of taking his husband's side, chose to go with the Indian wicket-keeper. On Instagram, Bonnie posted a photo with Rishabh Pant, wherein they could be seen holding two kids. She hit the nail with her caption, which read 'Best Babysitter'. 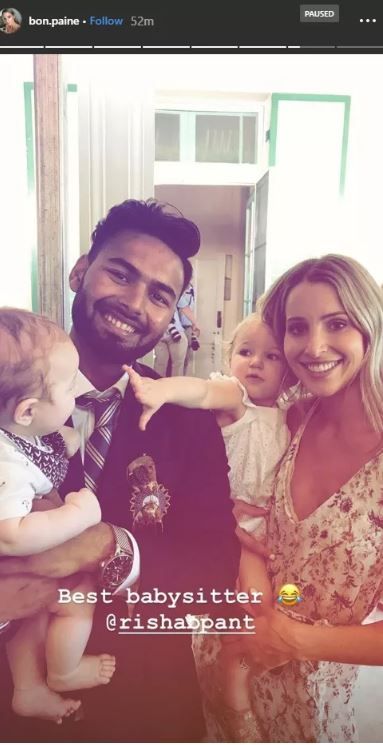