BAN vs ZIM Dream11 prediction: Bangladesh and Zimbabwe will now turn their attention towards the 3-match ODI series with the 1st ODI to be played at Sylhet.

After dominating Zimbabwe in the one-off Test match, Bangladesh will begin as favourites to win the three-match ODI series. In the only Test match of the series, Mushfiqur Rahim was the star with the bat scoring a double-hundred for the side. With a near full-strength side at the disposal, Bangladesh led by Mashrafe Mortaza, will hold the edge over their less fancied opponents.

Although Zimbabwe failed to put a fight and surrendered the Test match meekly, the ODI series will be a different ball game. The team will have couple of experienced layers at their disposal and should prove to be a handful for the hosts. The arrival of Sean Williams will further give them a chance to win the series and Zimbabwe will look to exact revenge in the first ODI in what promises to be a close encounter.

Also Read: Mushfiqur Rahim Opens Up On BIZARRE 'dinosaur' Celebration After 203* Vs Zimbabwe

Here is the BAN vs ZIM Dream11 team that is expected to fetch you the maximum number of points. 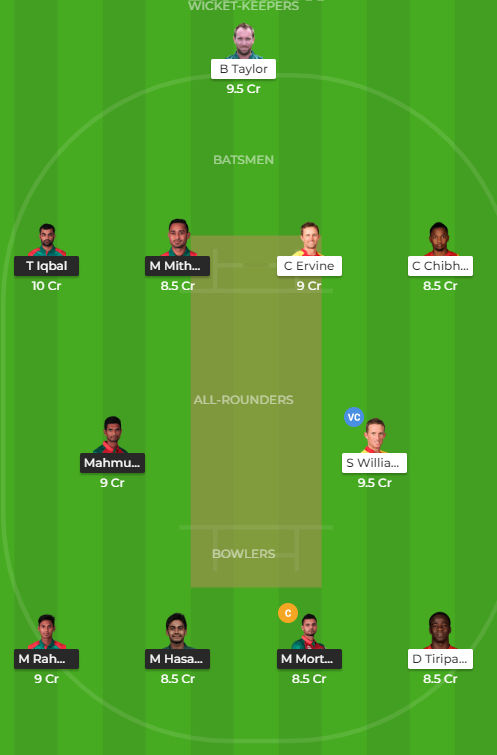 Bangladesh are the favourites to win this match.