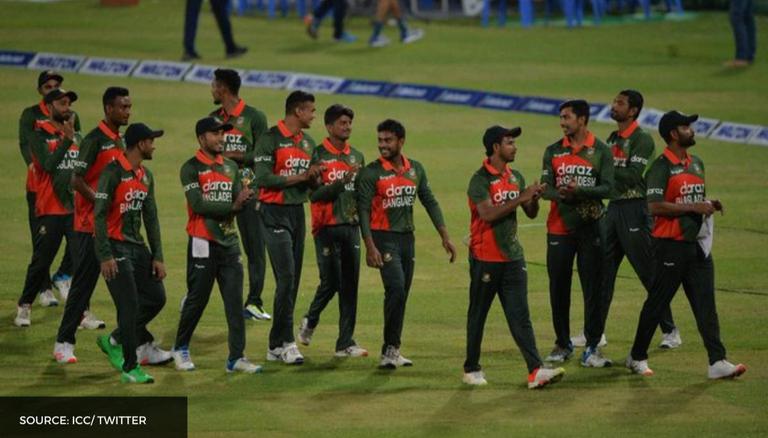 
The Bangladesh Cricket team is currently touring Sri Lanka to take part in the three-match ODI series. The Tamim Iqbal-led team has already played two matches and managed to win both of them to pocket the Bangladesh vs Sri Lanka 2021 series 2-0. They won the second match against the home team by 103 runs. Not only did the team put up a dominating display in the second ODI but the win also helped them achieve a major milestone.

Bangladesh's stunning victory over Sri Lanka in the second ODI came thanks to a brilliant knock from Mushfiqur Rahim. The wicketkeeper-batsman scored a magnificent 125 runs and combined with a fine bowling effort managed to win the match with rain also playing spoilsport. Sri Lanka while chasing the revised target of 245 runs in 40 overs, lost 9 wickets by the score of 141 before rain interruption saw the match being concluded via DLS. The win took Bangladesh to the top of the ICC Men's Cricket World Cup Super League table surpassing England (2nd), Pakistan (3rd) and Australia (4th). Team India, led by Virat Kohli, are placed  8th on the ICC ODI Super League points table having won 3 and lost 3.

Bangladesh go to No.1 in the ICC Men’s @cricketworldcup Super League standings (powered by @MRFWorldwide) 🌟

All you need to know about ICC ODI Super League

Speaking about the ICC ODI Super League, the format will be played between 13 nations, with World Cup hosts India and the next seven highest-placed teams automatically qualifying for the 2023 World Cup edition. For the bottom five, though, their World Cup dreams won't be over. They, along with five Associate sides, will participate in the ODI World Cup Qualifiers, which will then decide the final two entrants to the 10-team World Cup.

READ | Henry Nicholls dubs Indian spinners as real threat: 'We are expecting it to be tough'

Each team will earn ten points for a win, five points for a tie or no result or abandonment and zero points for a loss. The sides will be ranked according to total points earned across the eight series. Each team will get a chance to play matches on a home and away basis (four home and four away three-match series), which means they will be playing a total of  24 matches during the course of the league which will ensure the team will get a chance to face a variety of oppositions at various venues with equal home advantage.