Hobart Hurricanes Tim David while looking to get strike back deliberately ran a short run for which umpires decided to award Melbourne Stars 5 runs. 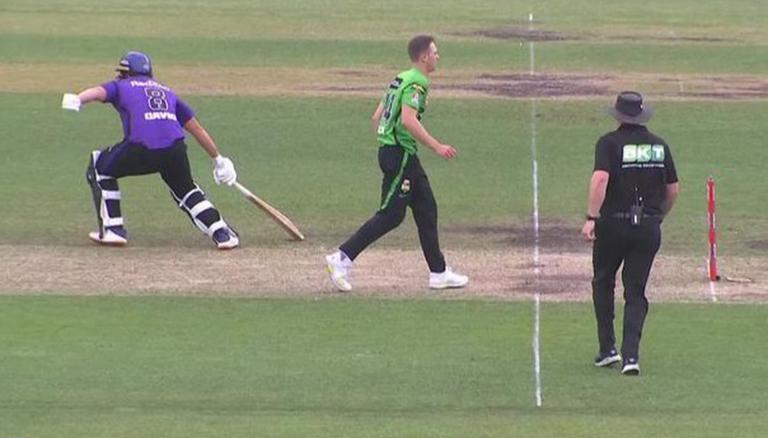 The incident involved Hobart Hurricanes batsman Tim David, who tried to get back on strike by using unfair means. During the 5th ball of the 20th over of the Hobart Hurricanes' innings, Tim David hit Melbourne Stars bowler Brody Couch's delivery to long-on and ran a couple. However, in a bid to retain strike, the cricketer deliberately did not ground the bat at the non-striker's end, and was found short of the crease.

Stars will start their innings with 5 free runs courtesy of this... #BBL11 pic.twitter.com/lz9tRxNLLB

Umpires were quick to notice the incident and came into action by awarding a 5-run penalty to the Hobart Hurricanes. Furthermore, the two runs taken were not awarded to the Hobart Hurricanes either. Following the controversial end to the innings, former Australia cricketer Michael Hussey admitted that he had never seen something like David's effort before.

Hobart Hurricanes won the bat flip and decided to bat first at the Blundstone Arena. Ben McDermott and skipper Matthew Wade gave a blistering start to the team, reaching the 90-run mark inside 10 overs. However, the 93-run stand was brought to an end by Nathan Coulter-Nile, who dismissed Matthew Wade.

Melbourne Stars, chasing 181 for win, lost Marcus Stoinis and skipper Glenn Maxwell early. However, Joe Clarke and Joe Burns did try to get innings on track before Clarke was dismissed by D'Arcy Short for 52 runs. The Stars kept losing wickets at regular interval, with Andre Rusell failing to score big runs. In the end, the total proved too much to handle as they finished their innings at 156/9, losing the match by 24 runs. Riley Meridith and Tom Rogers picked up 3 wickets apiece while Nathan Ellis picked up 2 wickets.