David Warner and Matthew Wade were involved in a heated on-field spat in the BBL 2022-23 after Wade lost his cool on Sydney Thunder captain Chris Green. 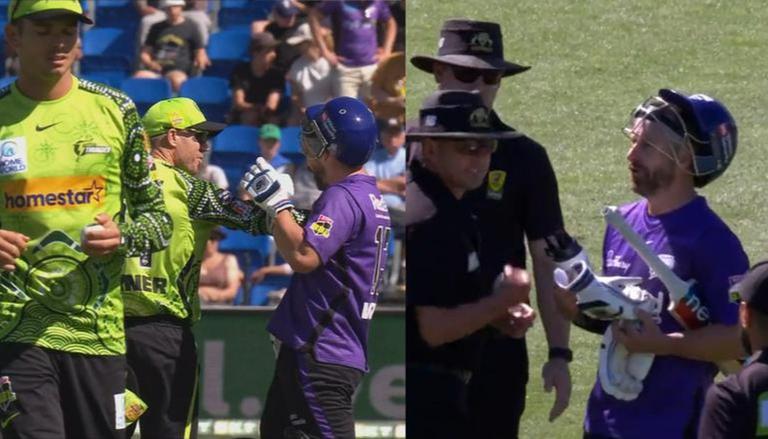 
Australian cricketer David Warner was seen shoving away Matthew Wade during the Sydney Thunder vs Hobart Hurricanes, BBL 2022-23 match on Sunday. The incident currently going viral on social media took place after Wade was involved in a heated exchange of words with Thunder captain Chris Green. At this moment, Wade was batting alongside Tim David, who remained unbeaten after scoring 70 runs in 40 balls.

As the war of words between Wade and Green concluded, Warner was seen shoving away his long-time Australian teammate. The reason behind the altercation is understood to be Wade pulling out of his batting stance as Green approached the bowling crease. Interestingly, both captains discussed the incident in a post-match discussion and played it down together.

"I can’t hit him, that was more my frustration"

“I think we’re alright, I can’t hit him, that was more my frustration,” Wade said, as per the video shared on Twitter by 7Cricket. At the same time, Green said, “It’s all good, we knew we were under par on a really good wicket and we’re both fierce competitors on the field and don’t want to give a look-in — trying to create something out of nothing”.

“Nothing was said, both of us play the game competitively on the field and we have a lot of passion for our team and it’s coming into crunch end of this tournament so there’s a lot of feeling when I run out for the Thunder and I’m sure Wadey’s the same for any team he plays for as well. For me there’s nothing to makeup, there’s no issue,” Green told 7Cricket.

“Honestly if you want to keep digging, there’s nothing there. We both play with feeling on the field and I’ve got no issues with him personally and we walk away from the game. It’s off the field now. We know Wadey loves getting into the contest and getting a bit feisty, Greeny was winding him up and they were suggesting I was going to get run out again,” Green added.

Coming back to the match, Sydney Thunder had notched up a total of 135/10 in 20 overs in the first innings, courtesy of Oliver Davies’ 45 off 38 and Green’s 21 off 18. Warner was bowled on duck after facing only two balls during his outing. On the other hand, Tim David’s 76 off 41 and Wade’s 30 off 22 took Hurricanes across the target as they won their fifth match of the season.