AB de Villiers was on strike for Royal Challengers Bangalore when Bhuvneshwar Kumar was handed the ball by his skipper to deliver the final over. 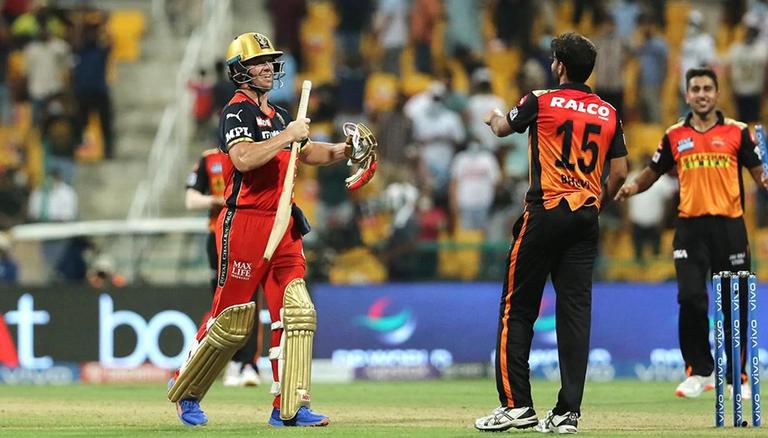 
Sunrisers Hyderabad (SRH) pacer Bhuvneshwar Kumar said his plan was to bowl wide yorkers at AB de Villiers during the nail-biting final over in Abu Dhabi last night. AB de Villiers was on strike for Royal Challengers Bangalore when Bhuvneshwar was handed the ball by his skipper to deliver the final over. Bhuvneshwar successfully defended 13 runs off 6 balls for SRH, helping them register their third win of the season.

"When AB bats, you think more. If I say there were no nerves then I would be lying. My focus was more on the process and where to bowl at him. My plan was to bowl wide yorkers at him. When I tried to bowl a straight yorker it went for six after which I again came back to bowling wide yorkers. We initially thought that we're 10-15 runs short but the way we bowled was tremendous," Bhuvneshwar Kumar said in his post-match interview with host broadcaster Star Sports.

Sunrisers Hyderabad were restricted to 141/7 from their 20 overs after being put in to bat by the RCB skipper Virat Kohli. Opener Jason Roy top-scored for SRH with a 38-ball 44. In reply, Bhuvneshwar Kumar accounted for captain Kohli in the very first over but his opening partner Devdutt Padikkal soldiered on from the other end as he scored a vital 41. Bangalore lost the wickets of Daniel Christian and KS Bharat cheaply but, Glenn Maxwell kept them in the game with a quickfire 25-ball 40 before being run out by Kane Williamson.

AB de Villiers then took matters into his own hands and decided to finish things off in style. He clobbered Bhuvneshwar Kumar for a huge six off the penultimate ball of the innings as the equation came down to six runs off the final ball. Nonetheless, it was the bowler who had the last laugh as he deceived the batsman and all ABD could manage was a single as the three-time finalists were finished at 137/6 from their 20 overs. SRH skipper Kane Williamson was adjudged the player of the match for his amazing performance on the field as well as with the bat.