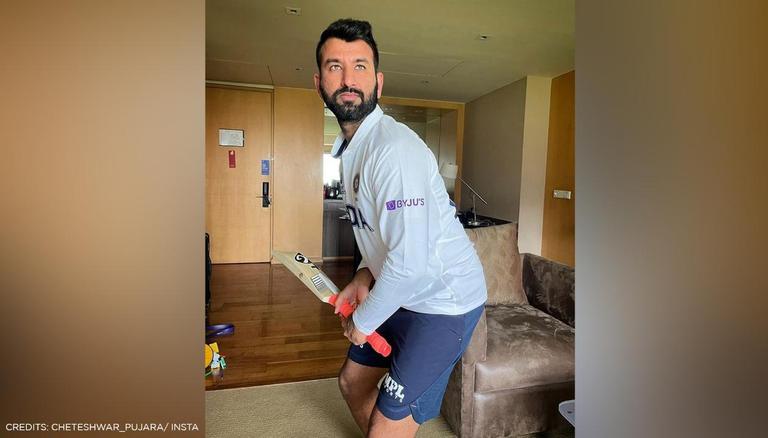 
It seems that Team India's Test batting mainstay Cheteshwar Pujara might be in the perfect frame of mind ahead of the highly-anticipated ICC World Test Championship final that will be played at Ageas Rose Bowl in Southampton between June 18-22.
India & New Zealand, who are currently the top two Test sides will battle it out in a one-off Test match for the biggest prize in red-ball cricket.

Just days before the high-voltage ICC WTC final, Cheteshwar Pujara meant business right away as he had shared an image of him sporting the retro jersey while keeping himself engaged with shadow practice from his hotel room.
The number three Test batsman captioned the picture as 'When in quarantine, work from home!'

Cheteshwar Pujara is currently serving the mandatory quarantine period in Mumbai ahead of the team's departure for a grueling tour of England.

READ | Cheteshwar Pujara takes 1st dose of COVID vaccine, urges fans to get theirs 'if eligible'

After the WTC final, the focus shifts towards the five-match Test series against England starting August 4.  The Indian team's last Test series win on English soil had come way back in 2007 when the Rahul Dravid-led side registered a 1-0 win in the three-match series. The Indian team had a forgettable outing in the 2011 season where they were handed a 0-4 whitewash a couple of months after their memorable World Cup triumph. In 2014, the MS Dhoni-led side did manage a comprehensive win at Lord's but could not capitalise as they went on to suffer a 3-1 defeat in the five-match series.