Hers's the best compilation of the memes that took the internet by storm after Ajaz Patel scripted history by dismissing 10 batters in a single innings. 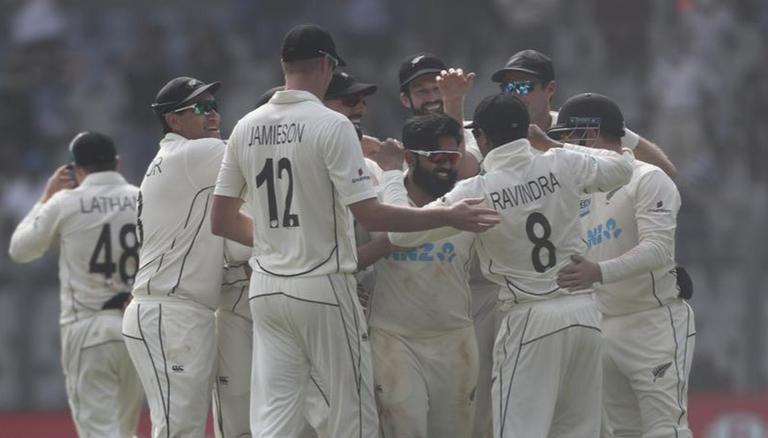 
Kiwi bowler Ajaz Patel scripted history on Saturday in India vs New Zealand, second Test match at the Wankhede Stadium by becoming the third bowler ever to dismiss all 10 opponent batters in an innings joining the likes of Anil Kumble and Jim Laker. Patel returned to the pavilion with the incredible 10-wicket haul after dismissing Indian wicket-keeper Wriddhiman Saha and Ravichandran Ashwin to kickstart his day. Ajaz dismissed centurion for India Mayank Agarwal on the individual score of 150 runs as his next scalp before sending pack half-centurion Axar Patel, followed by the Indian batting tail of Jayant Yadav, Umesh Yadav, and Mohammed Siraj.

Meanwhile, as Patel achieved the remarkable feat, cricket enthusiasts on Twitter donned their funny hats and came up with some hilarious memes about his 10-wicket haul. One of the fans tweeted a picture of Ajaz along with the first innings scorecard and hailed him as the ‘Clutchgod’ for single-handedly clinching all ten wickets in an innings. At the same time, another fan tweeted a still from a scene of popular web series, Mirzapur where the lead character can be seen flaunting his authority. The fan referred to Ajaz saying the character’s line during the Wankhede Test.

READ | Who is Ajaz Patel? Stats & profile of Mumbai-born NZ star who picked up 10 wickets vs IND

Another fan tweeted a meme from the popular movie Baahubali: The Beginning, where the lead character can be seen confused about the fact that why he has suddenly become everyone’s god. Meanwhile, another fan tweeted a meme from popular web series, Kota Factory referring to the state of Indian cricket fans following Patel’s 10-wicket haul. Take a look at some other hilarious takes by the fans on Patel’s 10-wicket haul.

New Zealand dismissed for 62 runs in the second innings

Meanwhile, New Zealand's joy following Patel's 10-wicket haul was short-lived as their batting line-up collapsed for a score of 62 runs on the board while batting in the first innings. Indian pacer Mohammed Siraj opened the flurry of Kiwi wicket-takers before the Indian spinners took the charge and restricted New Zealand for 62 runs. Ravichandran Ashwin dismissed the maximum of four Kiwi batters for India, while Axar Patel chipped in with two wickets and Jayant Yadav removed one Kiwi batter.

Indian skipper Virat Kohli decided against New Zealand following on as Indian opener Mayank Agarwal came out to bat in the third innings of the match with Cheteswar Pujara, as Shubman Gill got injured while fielding. At the time of writing this article, India finds themselves at 51/0 at the end of 16 overs of play, with the lead of 314 runs in their hands. India would like to give their batters some much-needed playtime during the innings while looking to set a strong fourth innings target.

READ | IND vs NZ: Ajaz Patel reacts to historic 10-wicket haul; 'To be born here, then come back'