Lynn, who played alongside Dinesh Karthik at KKR, took a dig at the ex-KKR captain's outfit as he shared a picture of him receiving his first COVID-19 jab 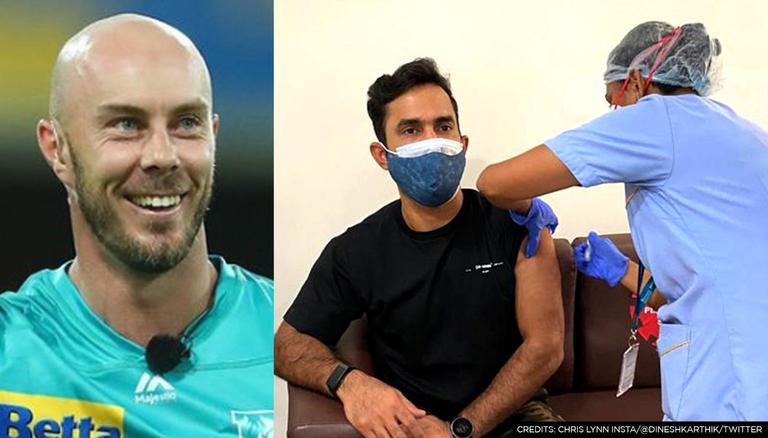 
As Indian cricketers rush to get their COVID-19 vaccines, veteran wicket-keeper batsman Dinesh Karthik received his first jab on Tuesday. Taking to Twitter, Karthik shared a picture of himself getting vaccinated. However, it was his former teammate and Australia's explosive hitman Chris Lynn who hogged the limelight with a hilarious comment on Karthik's picture.

Lynn, who played alongside Karthik at the Kolkata Knight Riders before he was roped in by Mumbai Indians, took a dig at the ex-KKR captain's outfit. While Karthik was dressed in a black t-shirt and camouflage-print joggers, Lynn quipped, "Could have at least worn pants" as the Indian received his first COVID-19 jab. The Indian glove had an even better response to Lynn's sarcastic dig as he hit the Australian out of the park with his witty remark.

In response, Karthik commented that he was thinking of wearing shorts to the vaccination centre but then realised that he was not in the Maldives, unlike the Australian. For context, Lynn - who featured for the Mumbai Indians this IPL season - is one of the many Australians that are currently quarantining in the Maldives as a result of Australia's ban on travellers from India.

"I was thinking shorts like you, then realised I'm not in Maldives. So wore this," Karthik replied.

Earlier on Tuesday, Jasprit Bumrah and Smriti Mandhana shared a picture of them getting the first COVID-19 vaccine jab. On Monday, India captain Virat Kohli, Ishant Sharma and Cheteshwar Pujara all got their first doses of the COVID-19 vaccine. The Indian contingent is set to be vaccinated before they fly off to England for the World Test Championship and the subsequent England tour.

Dinesh Karthik in India's second-string side?

With BCCI President Sourav Ganguly confirming that Team India will tour Sri Lanka for a limited-overs series in July, the prospective second-string squad and the management are yet to be decided upon. As the tour of the island nation is set to take place at a time when the main team will be busy with its Test appointment against England, the BCCI is expected to field a squad of 'white ball specialists' in order to clear its selection doubts for the T20 World Cup later this year.

Moreover, with Virat Kohli and his limited-overs deputy Rohit Sharma being busy with the Test series against England in the UK, the BCCI could also appoint Shikhar Dhawan as the interim skipper of the team touring Sri Lanka. The limited-overs tour could see Dinesh Karthik make a comeback into the Indian fold.

WE RECOMMEND
Shikhar Dhawan and Dinesh Karthik perform hilarious act on field; netizens left in splits
Will Chris Lynn not stay for the entirety of IPL 2021? What is the latest T20 development?
Dinesh Karthik makes THIS massive prediction in sweet Pat Cummins birthday wish: WATCH
Chris Lynn gives crucial update on playing in IPL 2021, reveals CA's cut from his contract
Dinesh Karthik confirms HUGE plans for the 2021 summer which do not need BCCI clearance