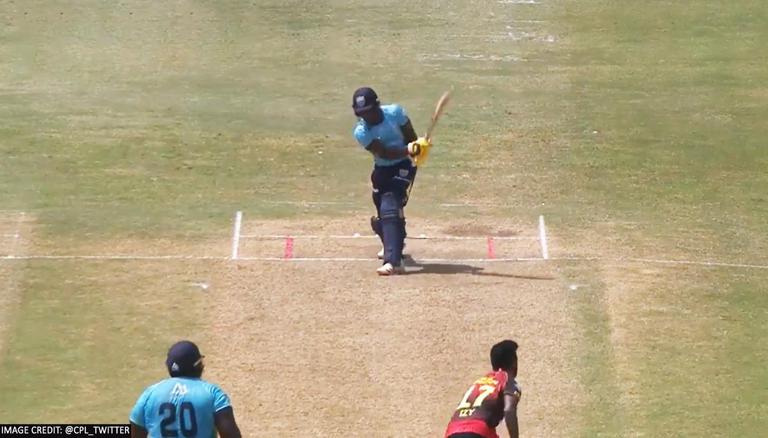 
West Indies batsman Andre Fletcher is not only known for his fancy hairstyle but also for his explosive batting. The recent Saint Lucia Kings vs Trinbago Knight Riders match in the ongoing CPL 2021 saw the wicketkeeper-batsman gave fans a glimpse of his explosive batting which also included an amazing shot off Isuru Udana bowling.

Andre Fletcher along with Rahkeem Cornwall providing a solid start to Saint Lucia Kings against Trinbago Knight Riders adding 51 runs for the opening wicket in 5.4 overs. The knock saw the right-handed batsman scored quickfire 28 runs of 25 balls which included three hits over the fence. One of the six was a no-look shot which is popular among cricket fans. It all happened on the last ball of the fifth over bowled by Isuru Udana. The left-arm pacer pitched the ball full, and Fletcher smacked it over the mid-wicket region.

After been asked to bat first the Saint Lucia Kings posted 157/5 after playing their full quota of 20 overs. Apart from Rahkeem Cornwall (23 runs) and Andre Fletcher (28 runs), Tim David (43 runs)and Roston Chase (30 runs) were the other major contributors with the bat which helped the team reach a competitive total. For TKR, Ravi Rampaul was the pick of the bowler, taking a three-wicket haul for 29 in runs in his quota of 4 overs.

Chasing 158 runs to win Trinbago Knight Riders could only manage to score 152/3, ultimately losing the match by five runs only. OIpeners Lendl Simmons and Tion Webster gave a steady start to the team in the run chase. Following the loss of both the openers and skipper Kieron Pollard, it was the New Zealand duo of Colin Munro and Tim Siefert who kept the team in the match   Tim Seifert almost pulled off a sensational win with his quick-fire unbeaten 16-ball 40 runs knock featuring eight boundaries, including three sixes. Colin Munro also stayed not out on 40 off 46 balls however the team still fell short of the target.