CSK Vs MI IPL 2021: Sachin Tendulkar Gets Into His Groove With Perfect Cover Drives; Watch 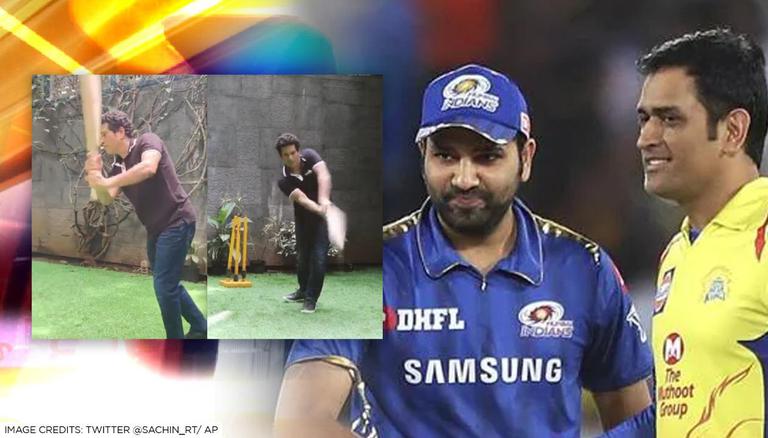 
India’s legendary cricketer, Sachin Tendulkar, took it to his official Twitter handle to post a video displaying his perfect skill set of hitting drives with ease. He posted the video as Mumbai Indians (MI) and Chennai Super Kings (CSK) clash against each other in the opening match of second-leg of the Indian Premier League (IPL) 2021. Known for hitting some of the best drives during his time as an Indian player, Tendulkar played for MI from 2008 to 2013, representing them in 78 IPL matches.

In the video posted by him on Sunday, Tendulkar captioned it by saying, how about taking us for some drives before the IPL begins. In the video, he can be seen displaying his cover drives and his world-famous straight drive. Despite retiring from professional cricket as a player in 2013, Tendulkar’s master class while hitting drives, is evident in the video. On finding the footage, Indian cricket fans were overwhelmed by witnessing the legend’s driving skills and came up with some mesmerizing replies.

How about I take you for some drives before @IPL begins? 😉#CSKvMI #CricketTwitter pic.twitter.com/tIXR3ZAbu6

One of the fans hailed Tendulkar for his batting and said he still likes to watch Tendulkar’s batting more than any of the current batsmen. He said no other batsman can play the ball delivered in the same length, both vertically and horizontally.

Still I would like to watch(feel) your batting than any other current batsman. No batsman now has the ability to play a ball of the same length vertically and horizontally as you did. ❤️❤️❤️

Another user replied, asking Tendulkar, why doesn’t he play cricket anymore. He added that he still watches his precious innings on Youtube and the favourite thing about his childhood was watching Tendulkar bat.

READ | IPL 2021: What happened when CSK last played against MI at UAE?

Instead why don't you play 🙏🏻... I still watch your batting on YouTube... The best thing of my childhood ... Watching Sachin Tendulkar bat ❤️

Meanwhile, Star Sports India, the official broadcaster of IPL in India also replied, if we aren't already hyped for the IPL, Tendulkar's video hitting drives seals it for us.

Well if we weren't already hyped for #VIVOIPL tonight, this seals it 🤩🙌

Tendulkar played 78 matches of Mumbai Indians from the inaugural IPL edition in 2008. He scored a total of 2334 matches for the team with a strike rate of 119.82. Known as one of the greatest batsmen India has ever produced, he also hit 13 half-centuries for MI. With MI all set to face CSK on Sunday in the IPL resumption, they will look to inspiration from the legend and head into the match with their heads high. MI are currently placed at fourth place in the IPL 2021 points table with four wins in seven matches. On the other hand, CSK sit comfortably in second place with five wins in seven games, below table-toppers Delhi Capitals and ahead of Royal Challenger Bangalore and Mumbai Indians, respectively.

WE RECOMMEND
IPL 2021: When Ravindra Jadeja scored 37 runs in just 1 over; watch
Explained: Top factors which could decide the IPL 2021 Opener of CSK vs MI
IPL 2021: Rishabh Pant says 'ultimate goal is to win the trophy' for Delhi Capitals
IPL 2021: How to download Dream11 app for Android, iOS? A step-by-step guide
IPL 2021: DC, CSK, RCB on top of points table while others fight for Playoff berth
Listen to the latest songs, only on JioSaavn.com