David Warner Fails To Score Yet Again, Gets Mocked By Netizens

David Warner was dismissed by Stuart Broad for the fifth time in Ashes 2019. Warner was mocked by ICC after his poor run with the bat continued in fourth Test.

David Warner has had a forgettable Ashes series so far. Barring his fine half-century in the previous Test match where he had scored 61, the southpaw does not have any other impactful performances to boast of. David Warner has so far managed only a paltry 78 runs in seven innings of this series so far. His scores in the ongoing Ashes include 2, 8, 2, 5, 61, 0 and 0 respectively. Apart from this dismal record, David Warner has been Stuart Broad's bunny as well after the England pacer had dismissed the Australian batsman for the fifth time. In the fourth Test at the Old Trafford, Stuart Broad made early inroads for England as he sent back David Warner for a second-ball duck when the latter was caught behind by Jonny Bairstow.

READ: Jofra Archer Sledged By A Couple Of Australian Fans At Old Trafford

After David Warner had failed to open his account, the International Cricket Council (ICC) came forward to make fun of David Warner. It so happened that before the start of the Test match, Cricket Australia had tweeted that David Warner was going to resume his battle with Stuart Broad. 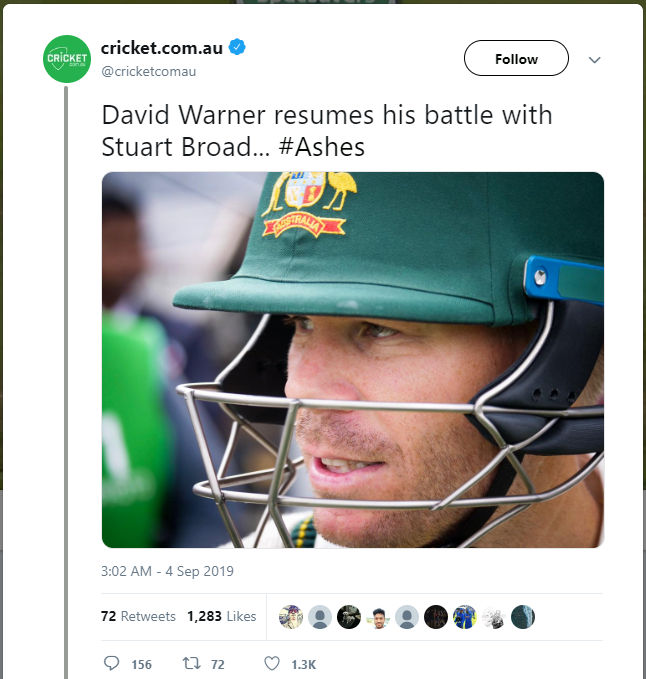 Nonetheless, after Warner once again lost the battle against the England fast bowler, ICC took to social media and wrote 'This aged well'. 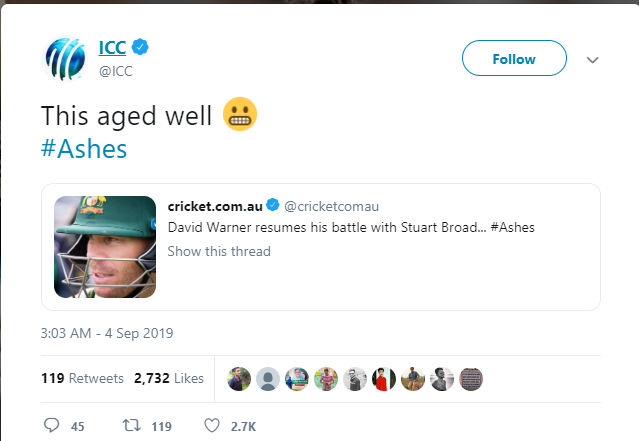 Australia were reduced at 28/2 after both the openers David Warner and Marcus Harris were dismissed early. Just when England thought that they had gained the upper hand, they were given a tough time by Steve Smith who made a successful comeback after having missed the third Test due to a concussion.

Steve Smith continued his splendid form in the ongoing Ashes series as he scored his third double century against England. Smith had also raced his way to 26th Test hundred as he not only surpassed Virat Kohli but also Master Blaster Sachin Tendulkar to become the second-fastest batsman to 26 tons in the game's longest format. Steve Smith scored a 319-ball 211 which included a couple of lifelines. After Archer had dropped him off his own bowling, Smith was dismissed by Jack Leach for 118. Unfortunately, replays showed that Leach had overstepped and he came back to the crease. In the end, Smith's double ton helped Australia reach 497/8 post which they declared their innings.