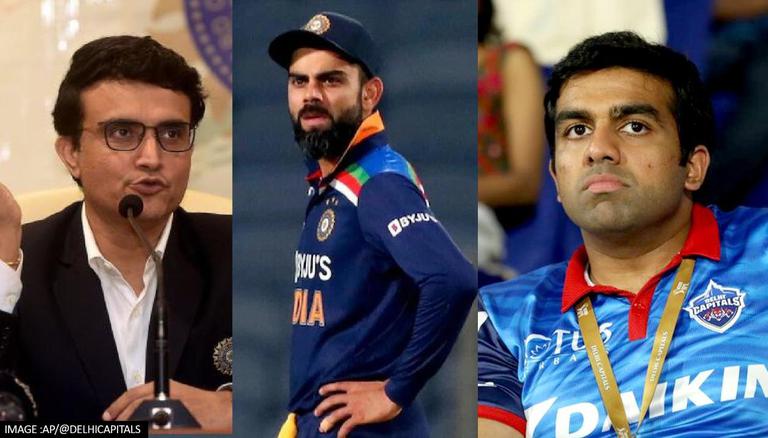 Jindal, who is the managing director of JSW Cement, sided with Ganguly's view and expressed how Dada's credibility is second to none. Moreover, he also liked a controversial fan tweet that referred to Kohli as a 'mediocre limited-overs captain.'

After taking to his official Twitter handle, Parth Jindal expressed full support for Sourav Ganguly, stating that his 'credibility is undeniable.' He justified his stance by saying what the former Indian captain has done for Indian cricket, stating that he would never make any compromises. The Delhi Capitals co-owner ended his post by hoping that the controversy gets resolved soon as 'right now the only loser is Indian cricket.'

READ | From Virat Kohli's explosive press conference, BCCI put out one tweet; Here it is

And this was not it as then Jindal also liked a controversial tweet made by a fan. The netizen said that he 'totally agrees' with the Delhi Capital owner that Sourav Ganguly made the right decision by 'sacking a mediocre limited-overs captain.' Their post ended by stating that 'cricket is much bigger than the bruised ego of Virat Kohli,' a comment unlikely to have gone well with the several supporters of the sacked skipper. 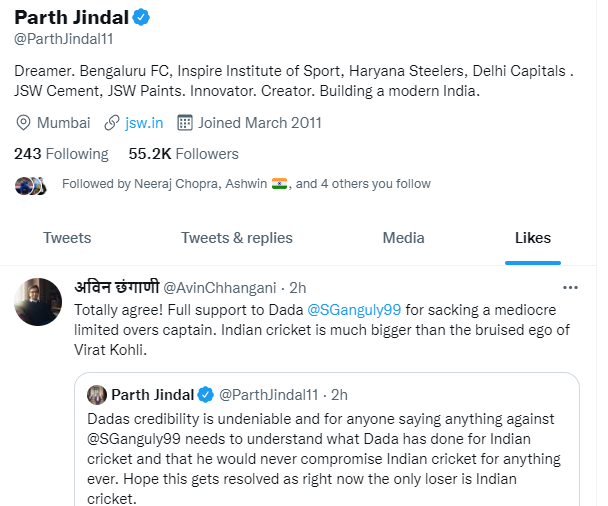 What happened between Virat Kohli and Sourav Ganguly?

Despite Virat Kohli's explosive press conference on Wednesday, BCCI president Sourav Ganguly has failed to comment on the massive controversy. According to PTI, he told local media persons on Thursday, "No statements, no press conference. We will deal with it, leave it to (the) BCCI."

While speaking to reporters on Wednesday, Kohli cleared the air by denying Ganguly's earlier comments that the BCCI had requested him not to step down from the T20I cricket captaincy.

"I was never told that I should not leave T20I cricket captaincy. I told the BCCI before giving up the T20I captaincy. I told them my point of view. The BCCI received it very well. There was no offence. It was received well, saying it’s a progressive step. I told them I will continue as ODI captain and Test captain. I told them at that point clearly that if the office bearers or the selectors don't want me to handle either of the responsibility, I am fine with it. I said this clearly when I approached the BCCI to discuss my T20I captaincy," revealed the 33-year old.

Meanwhile, Ganguly had earlier told ANI, "It's a call that the BCCI and the selectors took together. Actually, the BCCI had requested Virat to not step down as the T20I skipper but obviously, he did not agree. And the selectors then did not feel it right to have two different captains for two white-ball formats."

It remains to be seen how Ganguly and the BCCI handle the captaincy row involving Kohli as this issue has created massive controversy across the country. While some fans have supported the decision of Dada and the Indian cricket board, several others are enraged by the manner in which Kohli was sacked. The 33-year old had claimed during his press conference that he was just told an hour and a half before the revealing of the Test squad that he will not continue as the skipper of the ODI team.