Virat Kohli on Thursday announced that he will step down as skipper of the T20 Indian Team post the World Cup. Is MS Dhoni the reason behind his decision? 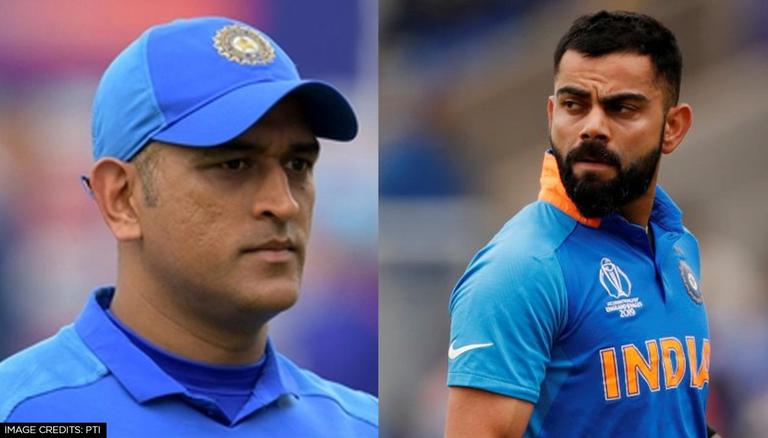 
With just weeks to go for the much-awaited ICC T20 World Cup and days for the resumption of the IPL 2021, Team India's all-format skipper Virat Kohli announced his decision to step down as captain in the shortest format of the game after the upcoming international tournament's conclusion. Virat Kohli, in a statement on Twitter, cited 'immense workload' as the reason behind his decision and nonetheless, exuded pride in his journey as Team India's captain in the format. Shifting focus to ODI and Test cricket, the Indian batting stalwart said that he had also consulted Head Coach Ravi Shastri and his white-ball deputy Rohit Sharma before arriving at the decision to step down after the marque T20 tournament later this year.

The announcement comes as a time when the Men in Blue gear up for the T20 World Cup, which Virat Kohli has clearly been eyeing as a hawk as his trophy cabinet as captain remains bereft of an ICC mark. Some consider the timing of the decision to be perfect, as it will provide a rehearsal for the next captain at the grandest stage possible - the T20 World Cup. However, some have also questioned if the 'surprise' decision to bring in former captain and Kohli's 'forever skipper' MS Dhoni as Team India's mentor for the World Cup and asked if it didn't go down well the current leader.

Silencing these whispers, top sources have confirmed to Republic Media Network that MS Dhoni's appointment as a mentor had no influence on Virat Kohli's big T20 decision. The former captain, who has led India to three ICC titles, has been appointed as a mentor only for the T20 World Cup and not any further, which has been affirmed by BCCI Secretary Jay Shah himself. Sources have confirmed that MS Dhoni's appointment had no role in Virat Kohli's decision to step down.

Meanwhile, sources have indicated that the possible reasons why Virat Kohli laid his T20 captaincy duties to rest might be because of his dry run highlighted by the long wait for his 71st century. Moreover, the all-format captaincy seems to have taken a toll on the Indian talisman's batting. With talks of a split captaincy making rounds since the past year, Rohit Sharma's name has emerged as the top contender to succeed Kohli in T20s. Other than Sharma, KL Rahul, Shreyas Iyer and Jasprit Bumrah appear to be top names for the post of India's T20 captain.

Team India's skipper Virat Kohli on Thursday announced that he will step down as skipper of the T20 Indian Team post the tournament.

"I have been fortunate enough to not only represent India but also lead the Indian Cricket Team to my utmost capability. I thank everyone who has supported me in my journey as the Captain of the Indian Cricket Team. I couldn't have done it without them - the boys, the support staff, the selection committee, my coaches and each and every Indian who prayed for us to win," Kohli said in a statement posted on Twitter.