With the Friends Reunion buzz gaining steam on social media it seemed that Dinesh Karthik did not want to miss out on his opportunity to give his views. 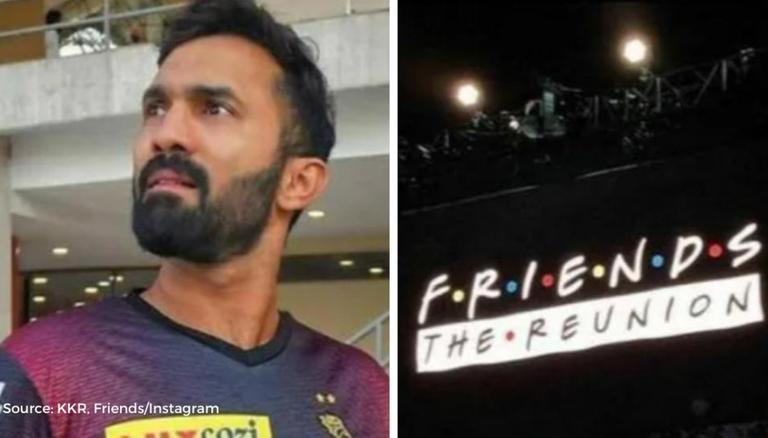 
Fans all over the world were delighted to hear the news about the reunion of the beloved cast of the TV show, Friends, which has become a phenomenon over the years. The much-awaited Friends Reunion will premiere worldwide on Thursday in the form of a special one hour and 44-minute long episode titled Friends: The Reunion. With there being a buzz about Friends Reunion, Dinesh Karthik revealed who is Kolkata Knight Rider's (KKR's) Joey and Chandler, two of the famous characters in the TV show.

This special episode marks the first official reunion of all the original Friends cast members since the show ended in 2004. The Friends Reunion special episode was initially scheduled to premiere in May 2020, but due to the COVID-19 pandemic, the filming of the show commenced in 2021. The creators of the show have recreated several iconic moments from the original sitcom, including the two apartments and the Central Perk cafe.

It is fair to say that the world is excited about the Friends Reunion, be it celebrities from any background, and it seems Dinesh Karthik is no different. DK posted a picture of him and Eoin Morgan where he refers to himself as Joey and Morgan as Chandler. Joey is a very funny character and is known for his antics. On the other hand, Chandler is sometimes very sarcastic and impulsive in what he does. It remains to be seen what the KKR captain thinks of DK's post.

However, the excitement in the cricketing fraternity does not end there as even Rohit Sharma gave his opinion about the Friends Reunion. On the eve of the special episode release, Rohit took to his Twitter handle where he shared a picture that showed all the fans present in the stadium cheering for him. Hence, it is fair to say that the Hitman is not so excited about the "French Reunion." In fact what Rohit cannot wait for is the fans, his friends, to come back to the stadiums.

For fans wondering how to watch Friends Reunion in India can do so on the Indian streaming service of Zee5. Zee5 had announced it will broadcast the show in real-time as it airs on HBO Max in the United States. The Friends Reunion stream in India will begin precisely at 12:32 PM IST on Friday, May 28. A subscription to Zee5 costs Rs. 499/month.

READ | FRIENDS Reunion premiering to Lady Gaga singing Smelly Cat: Recap of the day
READ | 'FRIENDS Reunion' Review: A tear-jerking and jovial homage that was worth waiting for
First Published: 27th May, 2021 22:03 IST
SUBSCRIBE TO US