Eng Vs NZ Live: Michael Vaughan Is Excited As Cricket Returns To Lord's After 654 Days

ENG vs NZ live: Former England captain Michael Vaughan has posted a flurry of tweets as he cannot contain his excitement on cricket returning to Lord's. 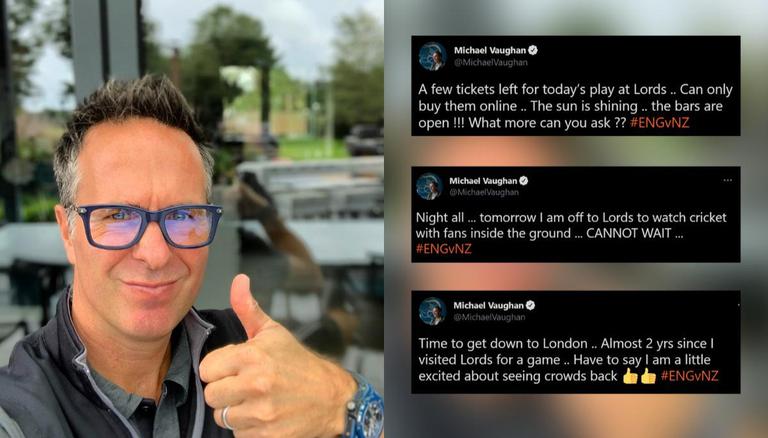 England will take on Nw Zealand in the first Test of their two-match series starting on Wednesday. The game will be played at Lord's Cricket Ground, marking a return to the venue after a wait of nearly two years. On the eve of the England vs New Zealand 2021 Test, former England captain Michael Vaughan is visibly excited to return to the stadium which could be sensed from his social media activity.

Former England captain turned commentator Michael Vaughan is visibly ecstatic on the return of cricket to the Lord's as England prepare to take on New Zealand. Vaughan took to Twitter yesterday and wrote that he was in London for the game, marking almost two years since he last visited Lord's which is widely regarded as the home of cricket. The 46-year-old wrote that he was excited to see the crowds back which England partly lifting restrictions amid the coronavirus pandemic. The Lord's capacity has been capped at 25%, meaning about 7,500 fans can be in attendance each day for the first international cricket of the summer.

A few tickets left for today’s play at Lords .. Can only buy them online .. The sun is shining .. the bars are open !!! What more can you ask ?? #ENGvNZ

Vaughan further wrote that he "CANNOT WAIT" to watch the game with fans in the stadium, with Joe Root's side set to play in front of a home crowd for the first time since 2019. The former England captain further wrote that there were a few tickets left for the day's play at Lord's, and the sun was shining with the bar was open. Vaughan's excitement was palpable and infectious with many fans seemingly excited to watch the game, either in the stadium or from the comfort of their homes.

READ | 'Virat Kohli is most impactful batsman in world': Ex-Pakistan skipper ahead of WTC final

Night all ... tomorrow I am off to Lords to watch cricket with fans inside the ground ... CANNOT WAIT ... #ENGvNZ

Time to get down to London .. Almost 2 yrs since I visited Lords for a game .. Have to say I am a little excited about seeing crowds back 👍👍 #ENGvNZ

ENG vs NZ live: When was the last Test match at Lord's played?

The last Test match at Lord's was played during the 2019 Ashes when the Australian team travelled to the country following the World Cup. The game was a fiery affair and witnessed the first-ever concussion substitute being used, as Marnus Labuschagne replaced Steve Smith, who had copped a blow from a Jofra Archer bouncer to the head. The hosts had batted first and were bowled out for 258, with Rory Burns and Jonny Bairstow scoring crucial half-centuries. In response, Australia managed 250, despite being 102/5, with Steve Smith scoring a stellar 92. England took control in the second innings with Ben Stokes scoring a quick-fire century, setting the visitors a target of 267. The match ended in a draw with Australia managing 154/6 at Stumps on Day 5.

READ | David Warner shares his plight on COVID-19 situation in India, says 'it was terrifying'
First Published: 2nd June, 2021 13:53 IST
SUBSCRIBE TO US