The 3rd Test England vs India Test match started on a disappointing note for the visitors on Wednesday after they were bundled out for 78 in 40.4 overs. 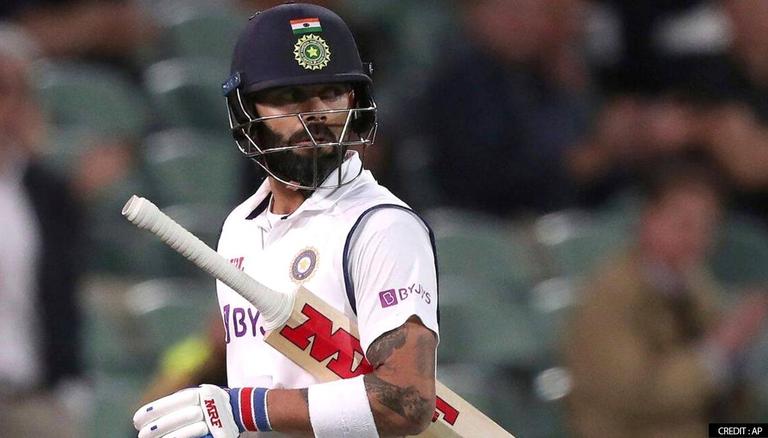 
The 3rd Test between India and England started off on a disappointing note for the visitors on Wednesday after they lost four wickets in the first session following Virat Kohli's decision to bat first. The Player of the Match for India at the Lord’s Test, KL Rahul, was dismissed for a duck in the first over by James Anderson. The 39-year-old pacer then went on to dismiss skipper Virat Kohli and Cheteshwar Pujara as well for the scores of 1 (9) and 7(17) respectively.

Amid the rapid fall of Indian wickets, a tweet by a netizen has caught the eyes of the cricket fans who predicted the exact score Virat Kohli would get dismissed on. Taking a dig at Virat Kohli’s recent video, in which he was seen lifting weights, the Twitter user going by the username ‘N’ tweeted ‘Virat does all these Olympic lifts just to nick one off on 7(17)’

Soon after Virat Kohli was dismissed on 7 from 17 balls by James Anderson, the tweet went viral. The author of the tweet put out another update asking his followers about what he should predict next. However, the user also tweeted that Virat Kohli would score a 100 on Wednesday, but it was overshadowed by his previous tweet.

Guys what i should predict next

One user commented, requesting ‘N’ to predict the date of Virat Kohli’s long-awaited 71st international century. Take a look at some other reactions:

How did you predict this bro🤯🤯🤯🤯

England vs India 3rd Test: Visitors all out for 78

The Indian team was bowled out for 78 on the opening day with Rohit Sharma being the top scorer with 19 runs. Veteran pacer James Anderson (3/6) and Craig Overton (3/14) claimed three wickets each, while Ollie Robinson (2/16) and Sam Curran (2/21) took two each as the England bowlers wreaked havoc on the visitors. India had taken a 1-0 lead in the five-match series after winning the second Test by 151 runs at Lord's.