Indian skipper Virat Kohli belives that someone like Cheteshwar Pujara should be left alone to figure out the "drawbacks" and come up with a game plan. 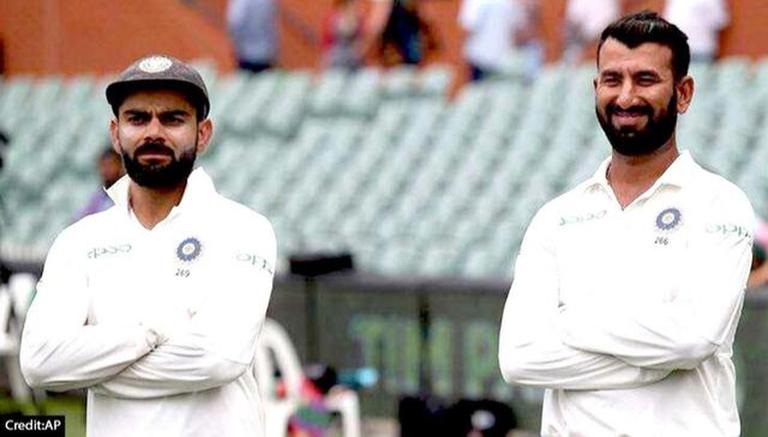 
Cheteshwar Pujara has often been criticized for scoring at a slower rate, eating balls, and failing to score big. Recent statistics also show come inconsistencies in Pujara's form. The 33-year-old was in great touch during the 2018-19 Border-Gavaskar Trophy scoring 521 runs from seven innings, inclduing three centuries and a half century.

Ever since, the player's form dipped significantly he has failed to put big runs on board. However, Indian Skipper Virat Kohli belives that someone like Cheteshwar Pujara should be left alone to figure out the "drawbacks" and come up with a game plan. All batsmen are different in their approach and Kohli too belives that Pujara will bounce back.

Pujara is India's second highest Test run-getter in the current squad and Kohli belives that while criticism is necessary, in Pujara's case it is unnecessary. "It's been going on for a while and I honestly feel a player of his calibre and experience should be left alone and it should be absolutely with the individual to figure out what are the drawbacks in his game," Virat Kohli said in a press conference ahead of the England-India Test Series.

Virat Kohli also stated that a senior player like Pujara is well aware of his responsibilites in the team and that they will what it takes to help the team. "Similarly with me or any other player in this team, we are very aware of the things we need to do for the benefit of the team. I can from outside say criticism is unnecessary but I know for a fact that Pujara doesn't care and criticism is as relevant as you want it to be" he said.

READ | Technique from Kohli, analysis from Rohit...: Rishabh Pant on what he picks up from whom

Virat Kohli also stated that the team has learnt a lot since their last visit to England and that his men are ready to take on England, starting tomorrow.  "The players, who were inexperienced in 2018 are now more experienced. Yes, there will be failures but we will have enough players to raise their hands up and be counted in pressure situations." he added.

The first Test match will be played between August 4 - 8 at the Trent Bridge Cricket Ground from 3.30 PM IST.