England were made to pay for some poor cricket by Australia's Steve Smith who scored a 319-ball 211. This was Smith's third double century against England.

England were pretty confident coming into the fourth Test match at the Old Trafford in Manchester after Ben Stokes' heroics helped them level the five-match Ashes Test series 1-1 at Headingley. But this time, they once again had to go through Australia's greatest pillar of strength Steve Smith who once again gave them a tough time. Steve Smith has had an excellent Ashes so far. He had scored centuries in both innings of the first Test where Australia decimated England by a mammoth 251 runs. Smith was once again a thorn in the nail for the hosts at Lord's. Nonetheless, a lethal delivery from Jofra Archer not only floored him but ended up ruling him out for the next innings and the following Test match. He made his return in the fourth Test and scored a brilliant double hundred. However, he got to the landmark riding on plenty of luck.

They say that in cricket if you give a chance to the best batsman when he has made a mistake, then he will make you regret it very badly and that is what England did as they gave not one but two chances to the dangerous Steve Smith. In fact, Smith would have never got to a century had Jofra Archer held on to that caught and bowled chance when the Australian was batting at 65. Then, after the ex-skipper got to his century, Jack Leach got rid of him as Smith was caught at slips and the Manchester crowd booed the top-ranked batsman while he was on his way back to the pavilion for 118. Unfortunately for England, Jack Leach had overstepped and Steve Smith was given another chance as the home crowd was shell-shocked. Steve Smith would go on to add 93 runs to his individual score. Meanwhile, the netizens showed no mercy on England after their lackluster fielding proved to be very costly. Here are some of the reactions. 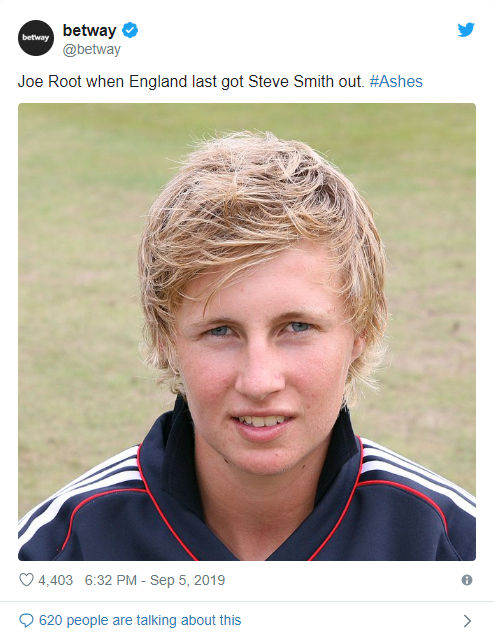 Steve Smith had recently dethroned Virat Kohli to become the top-ranked batsman in Test cricket. Now, the stylish batsman has scored a double century at Manchester. He was eventually dismissed 319-ball 211 as Australia declared at 497/8. Meanwhile, Smith created some new records in Test cricket. Steve Smith scored his 26th Test ton as he surpassed Virat Kohli, Sachin Tendulkar's records to register that many Test tons. Smith (121 innings) overhauled Tendulkar (136 innings) to become the second-fastest batsman to hit  26 hundreds in the game's longest format. At the same time, the number three batsman also scored his 11th Test hundred against England surpassing West Indies'Gary Sobers (10). He is only behind Sir Don Bradman who has 19 tons against England. Steve Smith also has three double centuries in the Ashes series.