A day after the injury, Faf du Plessis affirmed that he has returned to his hotel room from the hospital and is hopeful of taking the field soon. 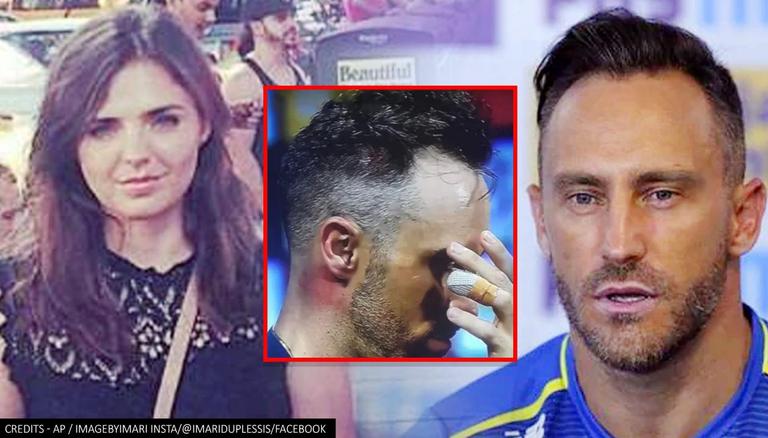 
Faf du Plessis' wife Imari Visser has shared a heartfelt message on social media after the former Protea skipper suffered a nasty collision on the field during a Pakistan Super League (PSL) match and had to be taken to the hospital for treatment. In her post, Imari addressed sports teams across the world and urged them to proactively involve family members of players during emergencies. Imari asked sports teams to institute a system where family members of players are better communicated in the time of crisis as she shared her own experience with the world.

"As a wife and a mom I would like to ask that we start to honor the relationship of next of kin. That was my person who just got severely injured with thousands watching. He is my whole life, but in that moment I am only a spectator. I finally saw the ‘news’ that Faf has been taken to the hospital. I know this is the way these things unfold, that other partners go through this and that I have so much company in waiting in agony on the sidelines," (sic) Imari wrote in her post.

"I ask you for the love of every sport, every partner, parent, and child who has been where I was last night. Please institute a system for emergencies. Not just in cricket, in all sports and teams. I have never felt more helpless and I know that no one is at fault here. If so many people are genuinely concerned, imagine the hearts of all those who love dearly. I could see the trouble, I could see that something was wrong and it was written across his face, but I was just another spectator," Imari added.

The veteran batsman had collided with fellow teammate Mohammad Hasnain during a match between Quetta Gladiators and Peshawar Zalmi in Abu Dhabi on Saturday. Following the incident, Du Plessis was immediately rushed to the hospital, where he was given necessary care for a concussion. Earlier, Imari had shared another post on Instagram, where her husband seemed in a lot of pain as he was seen holding his forehead with a bruise below his ear. "This is killing me right now. Surely he should be checked in hospital," Imari wrote on her Insta story.

BREAKING - Faf du Plessis has been sent to hospital for a check-up after he collided with Mohammad Hasnain while fielding in PSL game.#FafduPlessis #PSL pic.twitter.com/RnT9sCPDkz

A day after the injury, Faf du Plessis affirmed on social media that he has returned to his hotel room from the hospital and hopes to take the field soon. Providing an update about his health, Du Plessis said he has a concussion with 'some memory loss' but hopes to be back on the field soon.

Thank you everyone for all the messages of support. I'm back at the hotel recovering. Have concussion with some memory loss but I will be fine. Hopefully be back on the field soon. Much love. ❤️

As far as the match is concerned, Karachi-based batsman Saim Ayub was brought in as a concussion substitute. Ayub scored 35 runs for the Gladiators and remained their second-highest run-scorer after skipper Sarfaraz Ahmed (36*). However, Du Plessis' absence was felt during the match as Quetta Gladiators lost the match against Peshawar Zalmi by a whopping 61 runs. Batting first, the Zalmis had posted a total of 197 runs in 20 overs with the help of quick half-centuries from South African middle-order batsman David Miller 73 (46), and, former Pakistan batsman Kamran Akmal 59 (37) respectively. In reply, Gladiators could post only 136 runs.