Chennai Super Kings won the game by 27 runs courtesy of some explosive batting display by its top-order players and fiery bowling in the second innings. 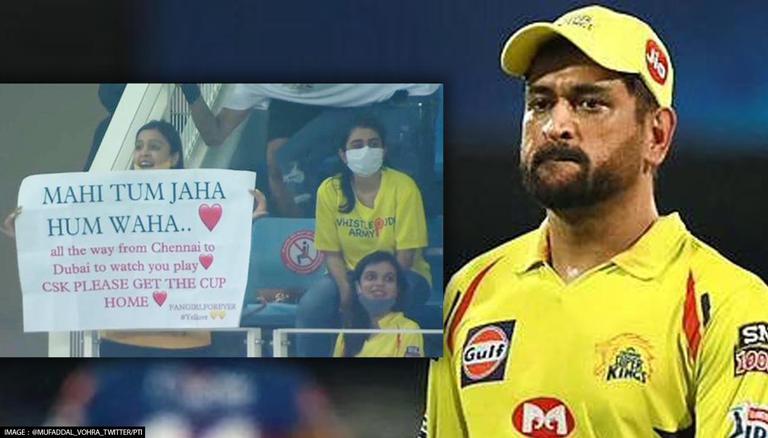 
Chennai Super Kings (CSK) and Kolkata Knight Riders (KKR) played the final of IPL 2021 at Dubai International Stadium on Friday. During the match, a fan was spotted in the stands who had apparently travelled from Chennai to the UAE to watch Mahendra Singh Dhoni play and win the cup for his franchise. The individual was seen holding a poster that read, "Mahi Tum Jaha Hum Waha. All the way from Chennai to Dubai to watch you play. CSK please get the cup home." Her wish came true as CSK beat KKR to win its fourth IPL title under the leadership of MS Dhoni.

A fan travelled to Dubai from Chennai for MS Dhoni. pic.twitter.com/kw5Ofc2VpZ

Chennai Super Kings won the game by 27 runs courtesy of some explosive batting display by its top-order players and fiery bowling in the second innings. Batting first, CSK openers Ruturaj Gaikwad and Faf du Plessis provided a solid start by forging yet another 50-run partnership between them. Gaikwad scored a quickfire 32 off 27 balls before being dismissed by Sunil Narine. Robin Uthappa joined Du Plessis in the middle and scored 31 off 15 balls before Narine dismissed him LBW.

Moeen Ali came to crease and played an amazing cameo to allow Du Plessis to score freely from the other side. Moeen scored 37 off 20 balls. Du Plessis hit 86 off 59 balls to help CSK post a mammoth total of 192/3 in 20 overs. KKR, on the other hand, suffered a dramatic collapse after a good partnership between their openers - Shubman Gill and Venkatesh Iyer. The duo scored a half-century each before they were dismissed by Deepak Chahar and Shardul Thakur for 51 and 50 runs respectively.

Sunil Narine was promoted up the order by his team but failed to fire and was dismissed by Josh Hazlewood for just two runs. KKR skipper Eoin Morgan scored 4 off 8 balls before being dismissed by Hazlewood. Dinesh Karthik was out for 9 as Ravindra Jadeja picked up his wicket. KKR suffered a humiliating collapse as none of their middle-order batters managed to score runs. Fast-bowler Shivam Mavi scored more runs than KKR's middle-order batters as he hit 20 off 13 balls before being dismissed by Dwayne Bravo. While Thakur picked three wickets, Jadeja and Hazlewood finished with two each. Chahar and Bravo also picked 1 wicket each in the game.

WE RECOMMEND
IPL 2021: Dinesh Karthik admits to breach of Code of Conduct; read why was he reprimanded
IPL 2021 Final, CSK vs KKR: How can CSK defeat KKR to lift IPL 2021 trophy?
Sanjay Manjrekar reckons IPL 2021 'most frustrating' as compared to other seasons
WATCH: MS Dhoni and Co. celebrate Shardul Thakur's birthday post IPL 2021 win
IPL 2021: MS Dhoni lifts the lid on his mindset during crucial 18-run cameo vs DC
Listen to the latest songs, only on JioSaavn.com