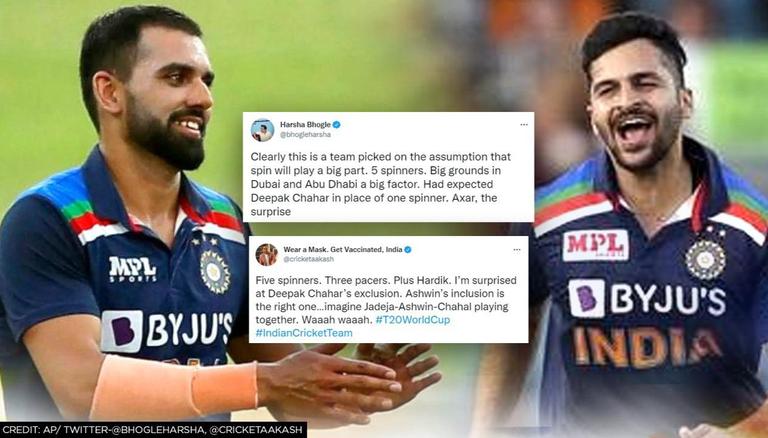 
The BCCI on Wednesday announced the much-awaited Team India's squad for the T20 World Cup slated to take place in the UAE and Oman from October 17. BCCI announced an 18-man squad with 3 players on stand-by. Interestingly, the stand-by players are Shardul Thakur, Deepak Chahar, and Shreyas Iyer. As soon as the BCCI announced India's squad for T20 World Cup, cricket experts and fans were surprised to veteran Ravichandran Ashwin in the final 15 as the off-spinner has not been part of Team India in the limited-overs format.

Cricket experts like Harsha Bhogle and Aakash Chopra expressed their surprise over the BCCI's decision to keep Shardul Thakur and Deepak Chahar in the list of standby players. Shardul Thakur recently shined with both bat and ball against England in the Oval Test. Deepak Chahar too impressed everyone with the bat during the India tour of Sri Lanka.

Clearly this is a team picked on the assumption that spin will play a big part. 5 spinners. Big grounds in Dubai and Abu Dhabi a big factor. Had expected Deepak Chahar in place of one spinner. Axar, the surprise

Biggest news is that Ashwin is recalled to the #T20WorldCup team. No other spinner turns the ball away from left handers. No Chahal means a big vote of confidence in Rahul Chahar. Bit hard on Shreyas Iyer

Shardul Thakur could have selected instead of Axar Patel.

Lord Shardul Thakur should have been in the main team, not in the reserves. This has hurt the sentiments of billions of Lord's fans. #Shardulians will boycott the World Cup.

One of the biggest development that cricket fans witnessed is the appointment of Team India's former cricketer MS Dhoni as a mentor for the Virat Kohli & Co for the marque event. During the press conference, BCCI Secretary Jay Shah revealed that he has talked to MS Dhoni who is currently in Dubai preparing for IPL Phase 2. As per Jay Shah, Dhoni agreed to be a mentor for Team India with Virat Kohli, Rohit Sharma, and Head Coach Ravi Shastri backing the decision.