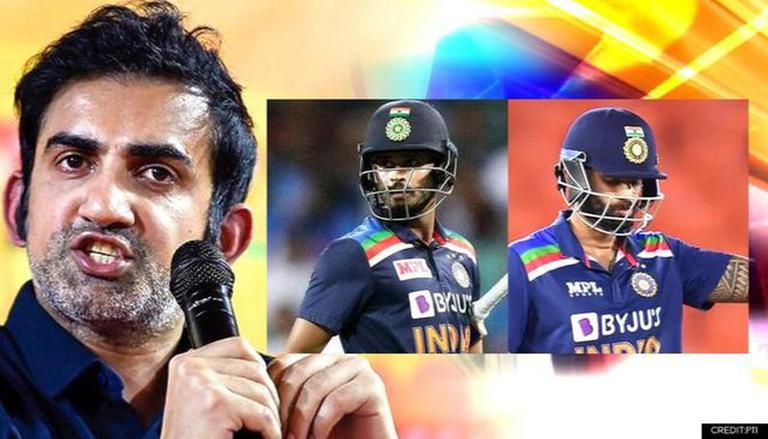 
As Team India's squad for T20 World Cup has been announced, former cricketer Gautam Gambhir has explained why the BCCI preferred to keep Suryakumar Yadav in the final 15 and kept Shreyas Iyer on the reserved list. Speaking in a Star Sports show, Gautam Gambhir called Suryakumar Yadav is more versatile as compared to out-of-action Shreyas Iyer. Shreyas Iyer has been out of Team India's squad after he suffered a shoulder injury during India-England limited-over series. Shreyas Iyer will be making his comeback to cricket with the IPL Phase 2.

Praising Surkymar Yadav, Gautam Gambhir said, "Surya is a completely different class, as compared to Shreyas Iyer. He is much more versatile, he is much more unorthodox as well. In T20 cricket, you need people that are unorthodox, you want people who can hit that ball in different areas, and that is what T20 cricket is all about."

"He can lap you, he can late cut you, he can hit you over extra cover; he’s got all the shots, especially at No.4, because sometimes No.4 is the most tricky position to bat in T20 cricket, probably the easiest is the top three, but No.4, because you might be in when you have lost two early wickets and you still want to continue the momentum," added Gambhir.

“Sometimes you come into the middle when you have got what 130 for 2, and you have got to continue with the momentum. So, Surya’s got both kinds of change, which probably Shreyas Iyer doesn’t have. And again, you gotta be mindful that he is coming after a serious injury and you never know what kind of a form he would be in the second leg of IPL as well. So, they’ve gone with someone, who has done really well, since he has gone into international cricket," Gambhir further stated.

Suryakumar Yadav on Thursday took to his social media to thank his coaches and family members for their constant love and support. Yadav wrote on Twitter that he is very "honoured" and "emotional" on getting the opportunity to represent India in the upcoming World T20, adding "dreams do come true".

BIG thank you to my coaches and family for their sacrifices and constant love & support. Completely overwhelmed on receiving so many wishes😇🧿#blessed pic.twitter.com/MV21dyNyxy