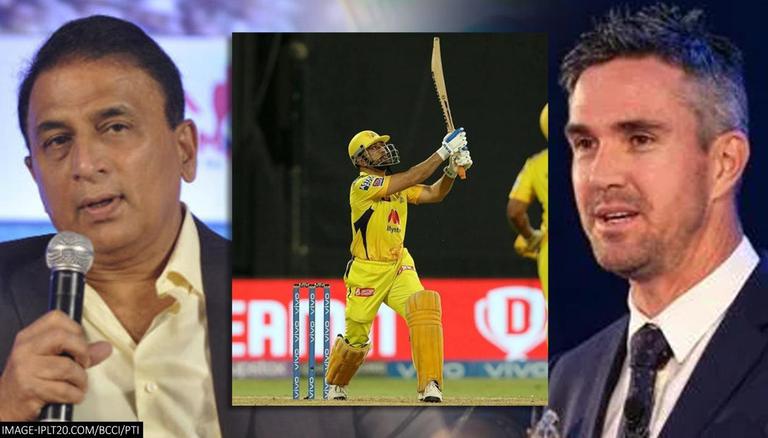 
Chennai Super Kings (CSK) on Thursday became the first team to qualify for the playoffs of the ongoing IPL 2021 after the MS Dhoni-led squad defeated the Sunrisers Hyderabad (SRH) by 6 wickets. MS Dhoni sealed the victory for the CSK in the last over with a six when his team needed 2 runs off 3 balls and booked a berth in the playoffs. Now, Team India's former cricketer Sunil Gavaskar and former England cricketer Kevin Pietersen have heaped praise on the 'Captain Cool'.

Speaking on MS Dhoni's last over six, Sunil Gavaskar outlined that he is no stranger to such situations as he has done this many times into his cricketing career. "He (Dhoni) does it so often. He takes it into the last over. When the supporters are biting the nail - they also know he is going to do it. But that anxiety, that you feel. He has done it so many times in his career," Gavaskar said on Star Sports after the match.

Kevin Pietersen also lauded the CSK skipper and cautioned the other teams that if Dhoni comes back to form, then it would be difficult to beat them.

"Dhoni has done it for so many years, he keeps doing it and doing it and doing it. What he has done now, should strike fear into the opposition. He has not been in the form for two seasons, so if he starts doing that now here, then, goodness, they got one hand on the trophy, they really do. They are serious out, on these conditions that are really good," said Pietersen.

"They got the Hazlewood effect, and the Jadeja effect and the openers have been really good. So, if Dhoni starts coming off now, finishes games off, then other teams have a problem. Scary proposition" added Pietersen.

Coming back to the IPL 2021 points table, MS Dhoni-led squad CSK is at the top of the table with 18 points. CSK has played 11 matches and has won 9. After the CSK, Rishabh Pant-led squad Delhi Capitals is at the second spot with 16 points. While the RCB is at the third position with 14 points, the Kolkata Knight Riders are at the fourth spot with 10 points. It is pertinent to mention that the Mumbai Indians have also 10 points, however, the defending champions are at the 5th spot due to their low net run rate.