Indian commentator Harsha Bhogle took to his social media account to pinpoint a reason that may have played a role in forming the psyche of English players. 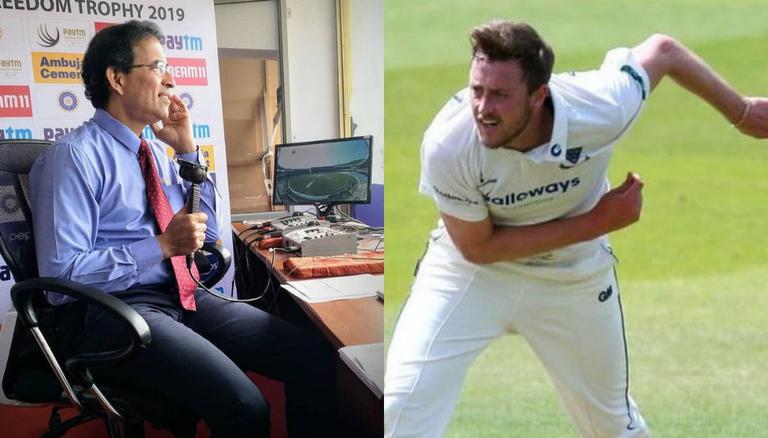 While the England Cricket Board (ECB) was quick to penalise Test cricket debutant Ollie Robinson for tweeting discriminatory tweets during his adolescent years, the cricketing body may have to deal with more such cases. The Ollie Robinson tweets saga has taken a new turn as additional members of England's cricket squad have come under scrutiny for dubious internet behaviour. Harsha Bhogle, a popular Indian sports broadcaster recently pinpointed a factor that may have had a significant part in the English cricketers' behaviour.

27-year-old Ollie Robinson showcased exemplary character in his debut Test match against New Zealand at the Lord's cricket ground and impressed fans by contributing in all departments. However, the player's inspiring performance was eclipsed by a major scandal soon after his unearthed tweets from 2012 to 2013 resurfaced online after stumps on Day 1. The ECB handed him a stern punishment by suspending him from international cricket pending an investigation into discriminatory tweets.

Apart from the Ollie Robinson tweets, posts from the likes of James Anderson, Dom Bess, Eoin Morgan and Jos Buttler added more fuel to the ongoing debate. While James Anderson was questioned by the masses for calling his teammate Stuart Broad a '15-yea-old lesbian' over a haircut, Morgan and Buttler were accused of being racist for their disparaging remarks about the way Indians speak English. Former England captain Michael Vaughan has been vocal about his stance on the recent developments by suggesting that past behaviour should not be a parameter to judge an individual.

While responding to a tweet from Michael Vaughan, Harsha Bhogle admitted to young individuals being vulnerable and easily influenced. However, he stated that one must keep a check on their surroundings. The celebrated commentator opined that one should put emphasis on things that are considered 'acceptable' in dressing rooms, academies as well as youth cricket. The 59-year-old might have hinted that the aforementioned reasons may have played a role in forming the psyche of English cricketers.

Young people are vulnerable and easily influenced. That is why I keep going on about looking at the air they breathe, about what is considered acceptable in dressing rooms, in academies and in youth cricket. But Mikey's point about looking at subsequent history is valid. https://t.co/S8aykmCOGH

England's white-ball captain Eoin Morgan and wicketkeeper-batsman Jos Butler have been accused of being racist towards Indians. Tweets from their accounts from 2017 have surfaced, in which the two, along with Brendon McCullum, make disparaging remarks about the way Indians speak English. After the Ollie Robinson tweets saga, Morgan and Butler also are being scrutinised by netizens after their historic tweets resurfaced. A certain section of fans wants the ECB to reprimand the players for their actions.

However, Michael Vaughan has come out in their support. The cricketer-turned-commentator took to his social media accounts to react to the latest developments. He opined that it was 'ridiculous'  that people were questioning the English board for the remarks made by Eoin Morgan and Jos Buttler. Here is how Michael Vaughan responded after Eoin Morgan and Jos Buttler's names were dragged in the controversy by netizens: