Harsha Bhogle Shuts Troll Who Asked Him To Use 'Purane' For Pujara And Rahane; See Post

Harsha Bhogle has slammed a troll on Twitter who wanted him to use #Purane referring to Cheteshwar Pujara and Ajinkya Rahane, while they face South Africa. 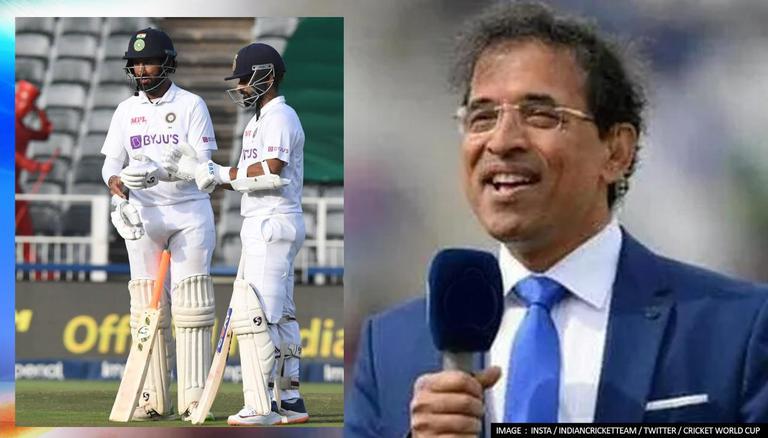 
Well-known cricket commentator from India, Harsha Bhogle slammed a troll on his Twitter handle on Wednesday, as the troll looked to make fun of Indian cricketers Cheteshwar Pujara and Ajinkya Rahane. Bhogle earlier tweeted his thoughts on the 100 runs plus partnership for the wicket by Pujara and Rahane in India’s first batting innings. A Twitter user replied to the tweet and asked Bhogle to use #Purane instead of saying Pujara and Rahane. Replying to the user trying to troll the Indian batting duo, Bhogle elucidated that he would never do that.

Praising Pujara and Rahane for their gritty knock, Harsha Bhogle earlier said, “Beyond the runs this partnership put together, and it could end up being the match-defining event, was the intent both showed. In the boundaries struck but also in the search for singles. Top class.” At the same time, replying to Bhogle’s tweet, the user said, “Harsha use the tag #Purane”.

Beyond the runs this partnership put together, and it could end up being the match defining event, was the intent both showed. In the boundaries struck but also in the search for singles. Top class. #PujaraRahane

Harsha use the tag #Purane

Pujara and Rahane added 111 runs for the third wicket partnership

Batting for the third wicket partnership in India's second batting innings of the Johannesburg Test, both batters stitched a partnership of 111 runs off 144 balls before Rahane was dismissed on the score of 58 runs off 78 balls. At the same time, Pujara scored a total of 53 runs off 86 balls during his stay in the middle. Following their dismissals, Rishabh Pant was seen involved in a heated exchange of words with Robbie van der Dussen, for the contentious catch by Pant in the first innings of the match. Pant was heard speaking angrily to the Proteas player on the stumps mic, while he walked back after trying to play an unnecessary shot following loss of concentration.

READ | 'How does he do it': Twitter in awe as 'Lord' Shardul turns 2nd SA Test in India's favour

Meanwhile, wickets kept falling for India from one end while Hanuma Vihari stood at the other. Shardul Thakur scored 28 runs off 24 balls while Jasprit Bumrah scored seven runs off 14 balls including a massive six. Vihari remained unbeaten on 40 runs off 84 balls, as Mohammed Siraj’s wicket by Lungi Ngidi, folded India’s innings on the score of 266 runs, with a lead of 239 runs in their hands. The Proteas now have to score 240 runs in the fourth innings in order to level the three-match series at 1-1, before heading to Cape Town for the final Test.

READ | 'Tiger' Roars in Bull Ring: Shardul takes 7-for to bring India back in game, visitors 85/2 at stumps