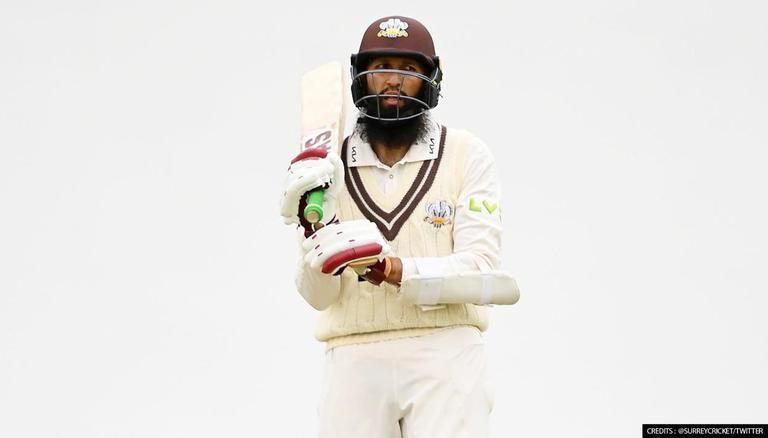 
Former South Africa cricketer Hashim Amla turned out to be a saviour for Surrey in the county championship as his gritty knock helped his team salvage a draw despite looking down and out against Hampshire. Considered as one of South Africa’s best batsmen of the modern era, Amla stood like an unbreakable wall between Hampshire victory and Surrey's defeat. The 38-year-old showed incredible patience and determination at the crease against a Hampshire bowling attack that bowled 64 maidens and more than 500 dot balls.

Hampshire scored 488 runs in their first innings before bowling out Surrey for just 72 runs leaving them with no choice but to try and force a draw. The team resumed the innings on the final day at 6-2 with Amla at the crease. The South Africa batsman survived was handed a lifeline after being dropped at short fine leg on 30 off Keith Barker. The drop proved costly as Amla batted all day to stay unbeaten on 37 from 278 balls as Surrey finished on 8-128, leaving Hampshire just two wickets short of what would have been an innings victory. As per the report by ricket.com.au statistician Andrew Samson reported that the 278 balls Amla faced is the most by a batsman in first-class history for a score of less than 40.

The result leaves both sides' chances of qualifying for the top division in the second phase of this year's County Championship in the balance as they go into the final round of fixtures, starting on Sunday. Hampshire, who are second in the group will face Gloucestershire at Cheltenham while Surrey who are placed third, will take on group leaders Somerset at The Oval. Those positions are likely to change following the result of the match between fourth-placed Gloucestershire and Middlesex.

While speaking to BBC Radio London Amla was full of praise for his young teammates for their commitment. He said "Everyone who came out there put their hand up and had a clear plan. We tried our best to block it out as best we could and, thankfully, we managed to go all the way. There were some nervous moments, but the way the youngsters played was the most-pleasing thing. They really stood out and that was fantastic for me".

He further said "It's a difficult situation as you always want to score runs, but when they committed to the cause, it worked out. You also need a bit of good fortune on a wicket like that, but thankfully it came our way. Days two and three were pretty poor from us, but we managed to pull it back on day four and everyone played their part".