Yuzvendra Chahal was one of the bowlers that was hammered all over the place by Heinrich Klaasen during his outstanding inning of 81 runs in the 2nd T20I. 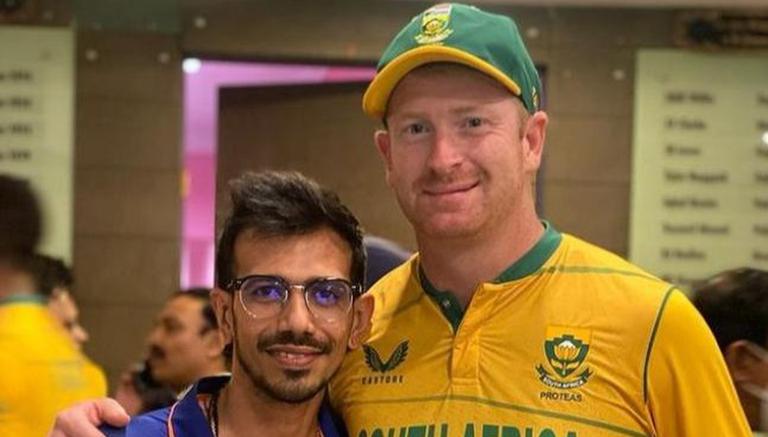 
After the conclusion of the five-match T20I series between India and South Africa on Sunday, Proteas batter Heinrich Klaasen shared a picture with Indian spinner and his good friend Yuzvendra Chahal. In a photo uploaded on his official Instagram account, the South African, who took the bowler around the park in the second T20I, referred to him as a "legend." The latter, who made a strong comeback in the series' final two games, responded to his opponent's gesture with red heart emoticons and also reshared the post on his own timeline. 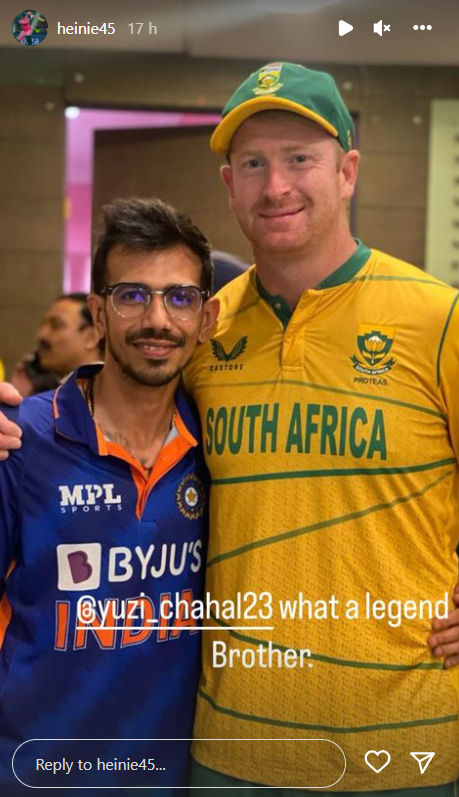 With a brilliant knock of 81 off 46 balls in the second T20I against India on June 12, Klaasen guided his team to a thrashing victory. Chahal was one of the bowlers who were hammered all over the place by the 30-year-old. In his four overs in the contest, the leg-spinner conceded 49 runs. Chahal took one wicket, that of South Africa's Temba Bavuma, but it wasn't enough to salvage the game, as Klaasen had other ideas. The batter, with his brilliant performance, helped the Proteas win by 4 wickets.

Chahal, however, made a strong comeback to dismiss Klaasen in the next two games. The bowler removed Klaasen in the third T20I for 29 off 24 balls before trapping him LBW in the fourth match for 8 off 8 balls. South Africa lost both the matches, which allowed India to make a comeback into five-match series. Chahal was named the player of the match in the third T20I. Thanks to his amazing performances, India levelled the series 2-2 before going into the fifth and final T20I.

On Sunday, the fifth T20I was played at Bengaluru's M. Chinnaswamy Stadium. The game began after a delayed start due to heavy rain in the city. The match was trimmed to 19 overs per side, but the play was called off after only 3.3 overs due to rain that did not stop on time. Both India and South Africa shared the trophy as the series was declared a draw. Indian bowler Bhuvneshwar Kumar was named the player of the series for his impressive bowling in the powerplays.