'How Does He Do It': Twitter In Awe As 'Lord' Shardul Turns 2nd SA Test In India's Favour

Shardul Thakur dismissed three Proteas batters in the first session of Day 2 of the IND vs SA, second Test match at Johannesburg and left fans in awe of him. 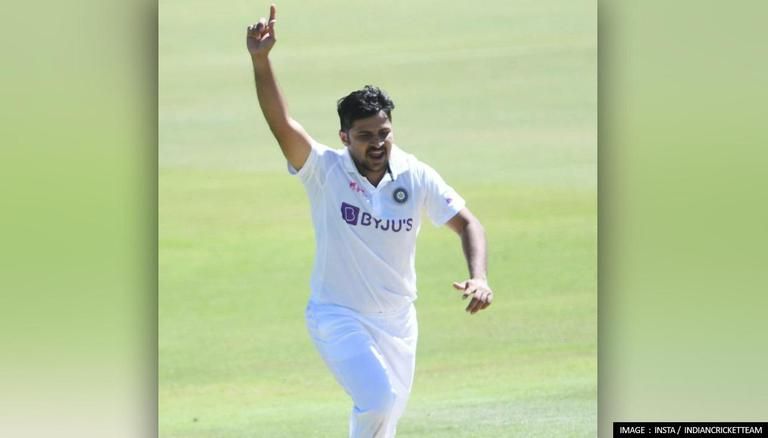 
Indian cricketer Shardul Thakur headlined the first session of the Day 2 of India vs South Africa second Test match at the Wanderers Stadium in Johannesburg by picking up three wickets for India. The day’s play went into lunch on Tuesday with the Proteas at 102/4 after 44.4 overs in their first batting innings, after starting the day on 35/1. Thakur dismissed the Proteas skipper Dean Elgar as his first scalp of the day, followed by the wickets of Kegan Petersen and Rassie van der Dussen.

Three BIG wickets for @imShard in the morning session as South Africa go into Lunch with 102/4 on the board.

Shardul’s contribution in the first session of Day 2 was much needed for India as skipper Elgar was dismissed on the individual score of 28 runs off 120 balls, while Petersen scored 62 runs off 118 balls before walking back. Meanwhile, Thakur removed van der Dussen on the score of one run before the lunch was called. He finished the session with the figures of 3/8 after bowling 4.5 overs, which left the cricket fans in awe of his stellar show.

Keegan Petersen departs after a brilliant knock of 62.

How did the Internet react to Shardul Thakur's triple strike?

Indian cricket fans took to Twitter to express their views and wondered how Shardul manages to come up with such performances over and over again. A fan mentioned that Thakur steps up every time India needs a breakthrough with the bat or ball, while another fan said that the whole world tries to beat Shardul in Test cricket. At the same time, another fan jokingly said that Thakur gave an hour to the other bowlers to take wickets and he stepped up himself to do the same when no one else did.

How many times, when India needs some breakthrough with bat or ball... He delivers #SAvIND

Lord been Lord.. giving one hour chance to other bowlers to take wickets

Another fan mentioned that everyone was predicting South Africa’s score before, but following the damage by Thakur, all predictions seem to be in danger. Meanwhile, India earlier scored 202 runs in total in the first innings of the match, courtesy of a half-century by skipper KL Rahul and a knock of 46 runs by R Ashwin. In the second innings of the match, Shardul and Mohammed Shami have accounted for three and one wickets respectively for India, as Proteas vice-captain Temba Bavuma finds himself out in the middle.

South Africa was in better position and everyone could predict their score, but after huge damage from Lord Shardul Thakur evryone' s prediction is in danger😅.

Lunch on day two in Johannesburg 🍲

However, the Proteas stand at 110/4 after 48 overs of play, with Bavuma and Kyle Verreynne currently at the crease.

WE RECOMMEND
IND vs SA: Is Mohammed Siraj injured? Will he return to field on Day 2? Here's an update
IND vs SA: Chief Indian selector expects Ruturaj Gaikwad to come good; 'he will shine'
IND vs SA: Sunil Gavaskar lashes out at Siraj for injuring Bavuma in 'needless' attempt
IND vs SA: Why Virat Kohli & Co. hold upper hand heading into 2nd Test against the Proteas
IND vs SA: South Africa take the knee for BLM; India join cause with different gesture
Listen to the latest songs, only on JioSaavn.com