India vs England: KL Rahul scored a century with 212 balls at Lord's on Thursday, Aug 12 and was welcomed in the dressing room by fellow teammates. Read. 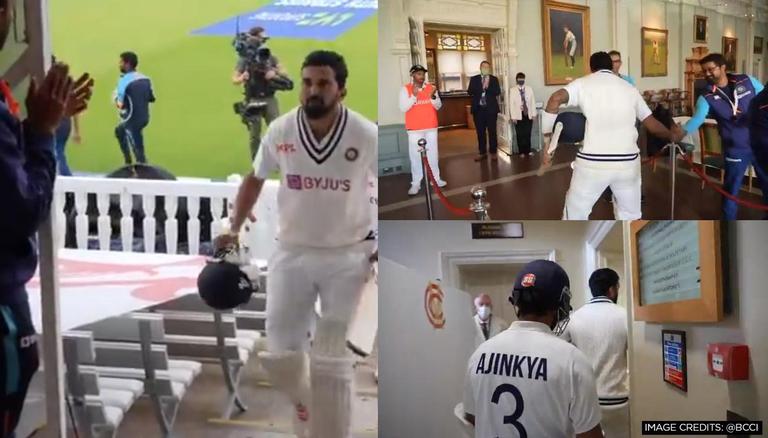 
India's opening batsman KL Rahul received a resounding welcome at the Lord's dressing room on Thursday, August 12, after registering a blistering 127* run knock against England. Hitting back at critics, KL Rahul answered with his bat as he piled up a well-deserved century with 212 balls in the 2nd India vs England Test at Lord's. Along with his ton, the cricketer also stitched India's highest-ever partnership in the stadium, breaking a 70-year-old record with hitman Rohit Sharma. The duo piled 126 runs till the fall of India's first wicket and Rohit Sharma's dismissal in the 44th over.

After Day 1 play was brought to an end, KL Rahul returned to the dressing room to receive a rousing welcome from Team India. In the video which has been shared by BCCI on Twitter, Rohit Sharma, Rishabh Pant, Ravi Shastri along with several other players and staff members can be seen welcoming KL Rahul and Ajinkya Rahane back from the pitch with thunderous clapping.

🎥 Scenes as @klrahul11 returns to the dressing room after his brilliant 1⃣2⃣7⃣* on Day 1 of the Lord's Test. 👏 👏#TeamIndia #ENGvIND pic.twitter.com/vY8dN3lU0y

It is important to mention that KL Rahul was not first in line to play the 1st England vs India Test match, however, with Shubman Gill and Mayank Agarwal out due to injuries, the wicket-keeper batsman has ensured that he milks the opportunity handed to him. In the first Ind vs Eng Test, KL Rahul scored a brilliant 84 and now he has followed it up with a remarkable 127*-run stint.

Rohit Sharma and KL Rahul opened the batting brilliantly as they had a partnership of 126 runs before Rohit was dismissed in the 44th over. Following Rohit's dismissal, James Anderson picked up the wicket of Cheteshwar Pujara in quick succession. Pujara scored just nine runs off 23 balls before he attempted a wild swing at a ball that was bowled way outside off.

Following Pujara's dismal, captain Virat Kohli walked out and helped steadied the ship. Kohli helped India reach a score of 267/3 before he too was dismissed. Similar to Pujara's dismissal, Kohli too attempted a shot outside the off-stump. The edge off Kohli's bat was caught by Joe Root at slip as Ollie Robinson got his first wicket. As things stand, India's score stands at 273/3 in 86.3 overs.