IND Vs NZ: BCCI Has Superb Reaction To Kumble's 'welcome To The Club' Wish To Ajaz Patel 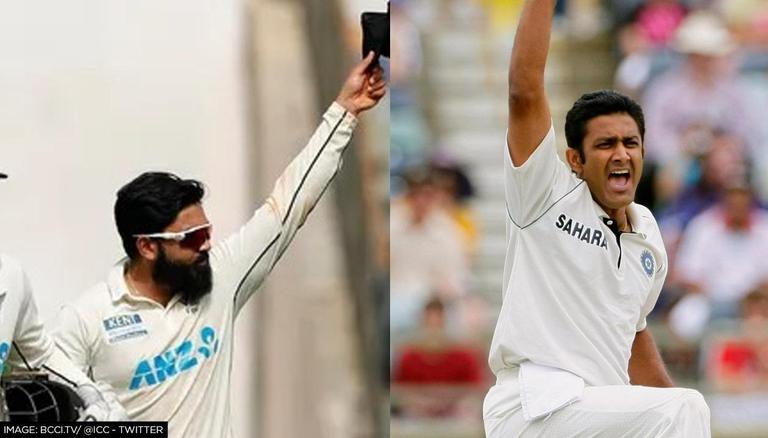 
Former India international Anil Kumble has reacted to New Zealand spinner Ajaz Patel's incredible feat of taking all 10 wickets in a single inning of a Test match. Kumble, who was the second bowler ever to achieve the rare record in Test cricket, welcomed Patel to the exclusive club after the Kiwi spinner picked 10 wickets against India in the second Test match in Mumbai on Saturday. "Welcome to the club #AjazPatel #Perfect10  Well bowled! A special effort to achieve it on Day1 & 2 of a test match," Kumble wrote on Twitter.

Welcome to the club #AjazPatel #Perfect10 Well bowled! A special effort to achieve it on Day1 & 2 of a test match. #INDvzNZ

BCCI were quick to reply to Kumble's wish to Ajaz Patel as they said 'game recognises game'. Both players are one of only three players to take 10 wickets in a Test match innings.

Patel became only the third international cricketer to achieve the feat in Tests after England's Jim Laker and India's Anil Kumble. Patel started his demolishing spell on Friday and picked four wickets before the end of play on Day 1. The spinner continued his form on Day 2 as he picked another 6 wickets to register his name in the records book. Patel finished with a bowling figure of 10-119.

Coming back to the match, New Zealand bowled India out for 325 runs courtesy of 10-wicket-haul by Ajaz Patel. For India, opener Mayank Agarwal shone with the bat as he scored a magnificent 150 off 311 balls with a strike rate of 48.23. Axar Patel also contributed with the bat as he scored 52 off 128 balls before being dismissed by Ajaz Patel. Meanwhile, New Zealand have already lost three wickets in their first innings at a score of just 17 runs. Mohammed Siraj has picked all three wickets for India.