IND Vs SA: Is Mohammed Siraj Injured? Will He Return To Field On Day 2? Here's An Update

Mohammed Siraj was spotted limping off the field due to the injury. Siraj's condition is being checked by the medical team, according to Ravichandran Ashwin. 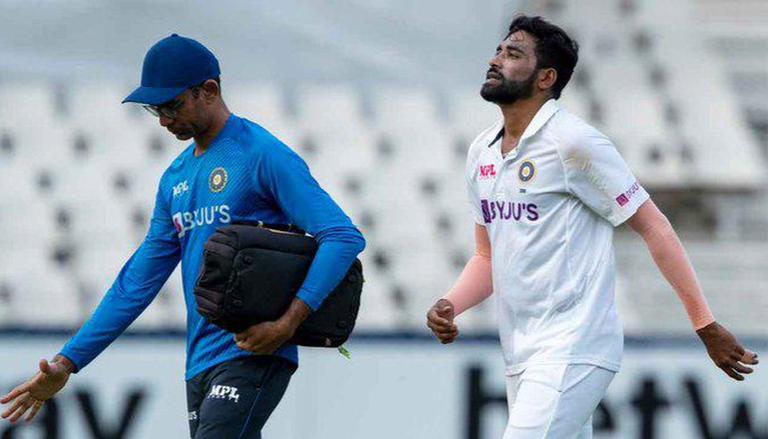 
On the first day of the second Test match against South Africa, Indian pacer Mohammed Siraj suffered a hamstring injury. After bowling the fifth delivery of his fourth over, Siraj was spotted limping off the field due to the injury. Siraj's condition is being checked by the medical team, according to Ravichandran Ashwin, who spoke to reporters after the close of play on Day One. Ashwin hoped for Siraj's return on the second day of the ongoing Test in Johannesburg.

"The medical staff are assessing him overnight and obviously it is very immediate. So initially what they do with these injures is just ice and they see for the next hour or two and I'm hoping with the history that Siraj has, he will definitely come out and give his best," said Ashwin.

The incident occurred in the 17th over of South Africa's innings when Dean Elgar and Keegan Petersen were on strike. While bowling the penultimate ball of the over, Siraj hurt his hamstring. The Hyderabad pacer was given immediate medical attention and soon after was seen walking off the field. Shardul Thakur replaced Siraj to complete the over.

READ | IND vs SA: Pujara scores 3, Rahane out for a duck; Fans say both 'should retire together'

The BCCI is yet to provide an update on Siraj's injury but it is likely that the bowler will return to the field on Day Two of the second Test match against South Africa. Given the way Siraj bowled in the game, his absence might trouble India with the kind of score they have posted in their first innings.

As far as the match is concerned, India scored 202 runs after winning the toss and electing to bat first. In the absence of regular captain Virat Kohli, KL Rahul took charge and led India from the front by scoring a crucial 50 runs with the bat. Rahul top-scored for India followed by Ashwin, who hit a quickfire 46 off 50 balls before being dismissed by Marco Jansen. Mayank Agarwal, Hanuma Vihari, and Rishabh Pant also contributed with the bat by scoring 26, 20, and 17 runs, respectively.

In reply, South Africa scored 35 runs for the loss of one wicket before the close of play on Day One. Dean Elgar and Keegan Petersen are still intact in the middle at scores of 11 and 14 runs. Aiden Markram was dismissed LBW by Mohammed Shami early in South Africa's innings after scoring just 7 runs. South Africa will resume batting at 35/1 on Day Two.

WE RECOMMEND
COVID-19: Centre calls reports of expired vaccines being administered in India misleading
India vs South Africa 2nd Test Live Streaming: How to watch IND vs SA in India, UK, US?
'India achieved highest-ever exports of $37 billion in Dec 2021': Union min Piyush Goyal
OnePlus 9RT to launch in India soon; company confirms in a cryptic post
Kia India posts 28 pc jump in vehicle sales to 2,27,844 units in 2021
Listen to the latest songs, only on JioSaavn.com