KL Rahul has been named the captain of the side in absence of regular skipper Rohit Sharma. Rahul has a poor record as captain of Team India. 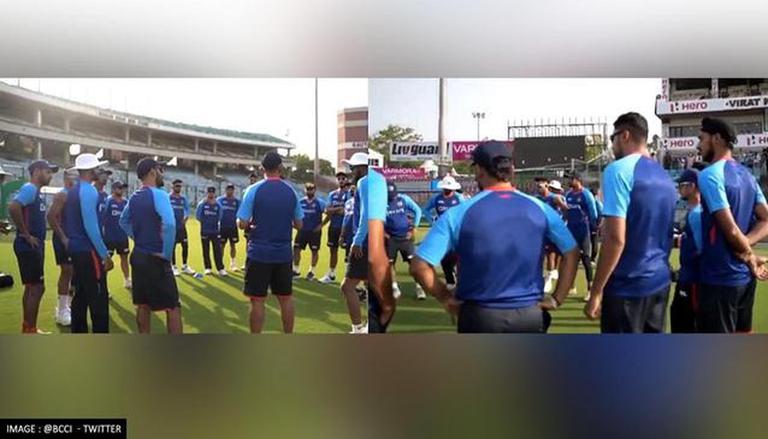 
Preparations are in full swing at the Indian cricket team camp as they readies for the forthcoming T20I series against South Africa on Monday. The first day of training was held at the Arun Jaitley Stadium in New Delhi, where the series' first match will be contested on June 9. The Board of Control for Cricket in India (BCCI) shared a video of the players gathered for their first training session on their official Twitter account.

In the video, Team India's head coach Rahul Dravid can be seen interacting with the players before their first training session. The footage shows Dravid giving an intense speech to the players huddled around him. Rishabh Pant, India's newly-appointed vice-captain, was among those present at the Arun Jaitley Stadium during Dravid's speech.

Back in Blue - Prep mode 🔛#TeamIndia begin training in Delhi ahead of the 1st T20I against South Africa.@Paytm #INDvSA pic.twitter.com/kOr8jsGJwL

India is slated to play a five-match T20I series against South Africa starting June 9. The first match of the series will be played in New Delhi followed by one match each in Cuttack, Vizag, Rajkot, and Bengaluru. KL Rahul has been named the captain of the side in absence of regular skipper Rohit Sharma. Rahul has a poor record as captain of Team India. He has led India in three ODIs and one Test match and has lost all of them. This will be the first time that Rahul will be captaining Team India in a T20I series.

READ | Ganguly reveals big difference between Dravid & Ravi Shastri; 'One is at you all the time'

Rahul will have a record to defend when he takes over as India's stand-in captain against South Africa. India hasn't lost a T20I match since November 2021, putting them on a joint-best 12-0 winning streak. If Rahul can help India beat South Africa in the first T20I, they would become the first team in the history of the format to go 13-0 in T20Is, a feat never before accomplished by any side in the shortest format.

Meanwhile, the T20I series will also mark the return of spin bowling pair Yuzvendra Chahal and Kuldeep Yadav. Hardik Pandya will also make a return to the Indian squad courtesy of his solid performance in the IPL. Umran Malik and Arshdeep Singh have been handed a chance to make their international debut for India.