Ex-India cricketer Wasim Jaffer asked fans to support Cheteshwar Pujara and Ajinkya Rahane who are at the crease at the end of Day 2 of India vs SA 2nd Test. 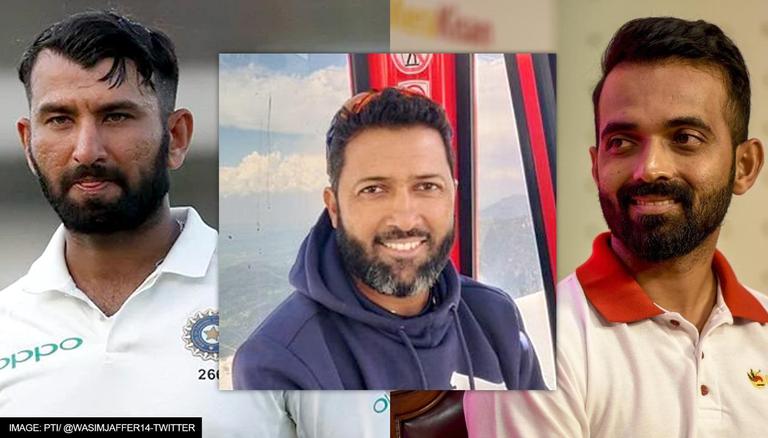 
Day 2 of the second Test between India and South Africa in Johannesburg was terrific for Shardul Thakur who acquired a career-best 7 wickets for 61 runs to keep Team in Blue on a steady contest against Dean Elgar and Co. However, India lost two wickets while batting in the 2nd innings, bringing the most experienced players Cheteshwar Pujara and Ajinkiya Rahane to the crease. The two have not been in great form for a few months and this could well be a make or break innings for both of them.

Reacting to the social media chatter, former India cricket Wasim Jaffer asked fans to back the duo as the Indian team has "history to write here." Jaffer, who is known for his witty tweets, shared a 'pipe cutting' scene from the movie Ishq where Aamir Khan and Ajay Devgn can be seen hanging from a pipe while another person is cutting it. Comparing Pujara and Rahane with the Aamir-Ajay duo, the ex-cricketer captioned it, "Don't be like the pipeman below. Yes, the rope is getting smaller but this partnership is crucial. Let's back them to come through. We've history to write here. #SAvInd #Rahane #Pujara."

Wasim Jaffer asks fans to back Pujara and Rahane

Don't be like the pipeman below. Yes the rope is getting smaller but this partnership is crucial. Let's back them to come through. We've history to write here. #SAvInd #Rahane #Pujara pic.twitter.com/KnhZeY7AE0

India lost skipper KL Rahul for 8 runs while Mayank Agarwal's managed 23 runs. The two under-fire seniors Pujara (35) and Ajinkya Rahane (11) were at the crease at the end of Day 2 and showed a lot of positive intent. India is now leading by 58 runs.

Reacting to Jaffer's tweet, a netizen said, "Yess. Right now the partnership between Pujara and Rahane is very crucial for India. Let's support and back them for India. Let's hope the best for India. We can create a history. Fingers crossed."

The day started well for South Africa as their skipper Dean Elgar scored 28 off 120 balls while Keegan Peterson was playing an attacking role with 62 off 118 balls. However, Shardul Thakur came in 34th over and soon claimed wickets of Petersen, van der Dussen, Bavuma, Verreynne, Marco Jansen and Lungi Nigdi. Mohammed Shami also took two wickets while Jasprit Bumrah settled for one.

WE RECOMMEND
Wasim Jaffer's sly dig at Australia on Justin Langer's image: 'Only one team can...'
Michael Vaughan's 'brilliant' response to Wasim Jaffer's trolling: 'Have to admit it...'
IND vs SA: Cheteshwar Pujara reveals best cricket bio-bubble he has been part of
Wasim Jaffer highlights mistake from 2018, reveals one spot that 'is must' in South Africa
Harsha Bhogle highlights Cheteshwar Pujara's exclusive Test wins record in SENA countries
Listen to the latest songs, only on JioSaavn.com