IND Vs SA: Wasim Jaffer Shares Cricket Puzzle With Food Analogy; Can You Solve It?

Wasim Juffer's recent Koo seemingly hints towards a cricket puzzle for the fans to solve, ahead of the first Test match of India's tour of South Africa 2021-22. 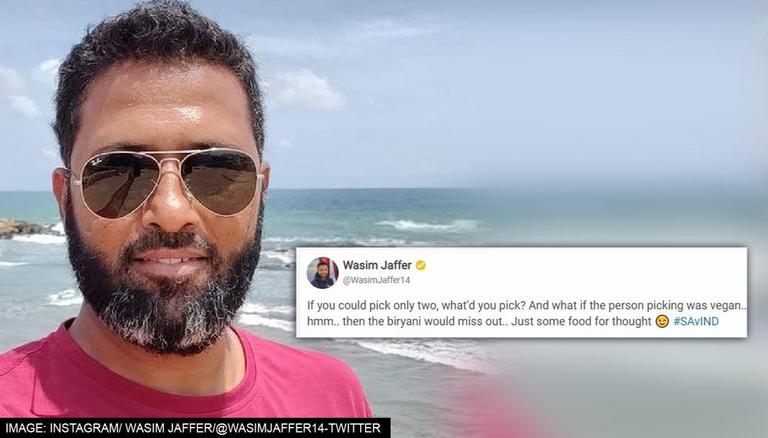 
Former Indian cricketer Wasim Jaffer took to his official Koo account on Thursday evening and made an interesting food analogy hinting towards a possible cricket puzzle. The Koo post, contained the pictures of the food dishes, ‘Pav-Bhaji’, ‘Neer Dosa’ and ‘Biriyani’ together in a collage. The interesting puzzle by the Indian domestic cricket legend comes ahead of India’s first Test match of their tour against South Africa, which gets underway from December 26 at the SuperSport Park in Centurion.

Jaffer captioned the post, “If you could pick only two, what’d you pick? And what if the person picking was vegan.. hmm.. then the biryani would miss out.. Just some food for thought 😉 #SAvIND”.

The caption might be pointing towards the selection worries, Indian skipper Virat Kohli faces before the Boxing Day Test at Centurion. The Indian squad for the three-Test match series against the Proteas at least five established players of the team, who didn’t play for India in the Test series against New Zealand that ended in the first week of December.

Meanwhile, Jaffer’s Koo post might be a hint towards the fact that Kohli has to choose between players like Shreyas Iyer, Ajinkya Rahane, Shardul Thakur, Mohammed Siraj, Mohammad Shami, Hanuma Vihari, and Ravichandran Ashwin are set to challenge one another for the spots in the playing XI for the first Test match. At the same time, the puzzle also might be a towards the fact that in July 2020, Shreyas went to meet Kohli with some Neer Dosa, Shammi alongside Siraj are known Biryani fans, while the Pav Bhaji could be hinted towards Ashwin, Vihari, and Shardul. Jaffer’s post is an interesting puzzle for the fans to solve as they await cricketing action, beginning on December 26.