India Vs England: Pitch-invader 'Jarvo69' Banned For Life from Headingley; To Be Fined

YouTuber Daniel Jarvis aka 'Jarvo69', had intruded into the field of play during the second Test match at Lord's yet again intruded after Rohit Sharma's wicket 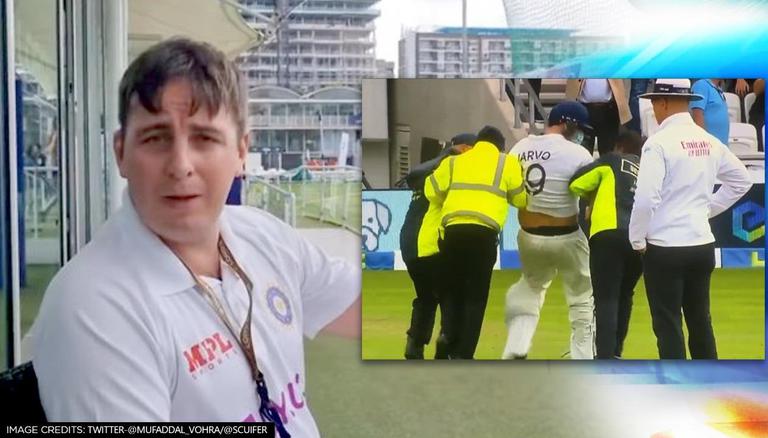 
England on Saturday defeated Team India by an innings and 76 runs and leveled the five-match Test series by 1-1 at Headingley, Leeds. Team India showcased some fightback on Day 3 of the third Test with Cheteshwar Pujara and Rohit Sharma scoring a half-century. However, during day 3 of the third Test, YouTuber Daniel Jarvis aka 'Jarvo69', had intruded into the field of play during the second Test match at Lord's yet again after Rohit Sharma's dismissal.

Now, it has been revealed that the YouTuber Daniel Jarvis aka 'Jarvo69' has been banned for life from entering the Headingley Stadium on charges of a security breach.

Jarvo has intruded India-England series twice donning Team India's Test jersey. First, he intruded in the Lord's Test and wanted to bowl for Team India and then he intruded into Headingley Test in a batsman's gear.

"Yes, Daniel Jarvis will be banned from Headingley for life. We will also be imposing a financial penalty," a Yorkshire CCC spokesperson told PTI when asked how the county deals with this kind of transgression.

Asked what kind of measures will be taken to avoid such embarrassment which has now happened twice, the spokesperson said: "As on previous days, there will be stewards present around there to stop anyone that attempts to get on." On Friday, just after the fall of Rohit Sharma's wicket, 'Jarvo 69' was seen popping up from the gallery located on one side of the sightscreen, wearing batting pads and a blue helmet with a surgical face mask on.

This kind of security breach could potentially scare the players at a time when strict bio-bubble rules are in place following the outbreak of COVID.  Notably, Team India's off-spinner Ravichandran Ashwin also requested Daniel Jarvis to stop invading the pitch after the latter walked in to take guard at the fall of Rohit Sharma's wicket on Friday. Ashwin first praised Rohit, skipper Virat Kohli, and Cheteshwar Pujara and then made a special mention for Jarvo to stop invading the pitch.

Coming back India vs England third Test, English bowlers came out all guns blazing on Saturday and wrapped the third Test up against India in the opening session itself. English skipper Joe Root believes it was a clinical show from the boys as the team registered an innings victory to level the five-match series 1-1 with two games to go.

READ | Mohammed Siraj targeted by England fans, Rishabh Pant reveals what they did to him

Resuming at an overnight score of 215 for 2, India's second innings folded in 99.3 overs with England pacer Ollie Robinson taking five wickets. Team India were bundled out for a meagre 78 in their first innings on the opening day of the third Test. England then posted 432 in their first innings to take a mammoth lead of 354 runs.

READ | England vs India: Pitch-invader Jarvo back, all padded up to take over from Rohit Sharma

For his brilliant five-wicket haul, Ollie Robinson was chosen as the player of the match.

WE RECOMMEND
England vs India: Pitch-invader Jarvo back, all padded up to take over from Rohit Sharma
England vs India: Fan breaches security to invade pitch at Lord's; leaves Siraj in splits
IND vs ENG: Team India arrives at Leeds for third Test, BCCI shares photo of venue
On this day in 2002, three Indian legends scored centuries in one innings at Headingley
Ind vs Eng 3rd Test: Bumrah all set to become fastest Indian to grab 100 Test wickets