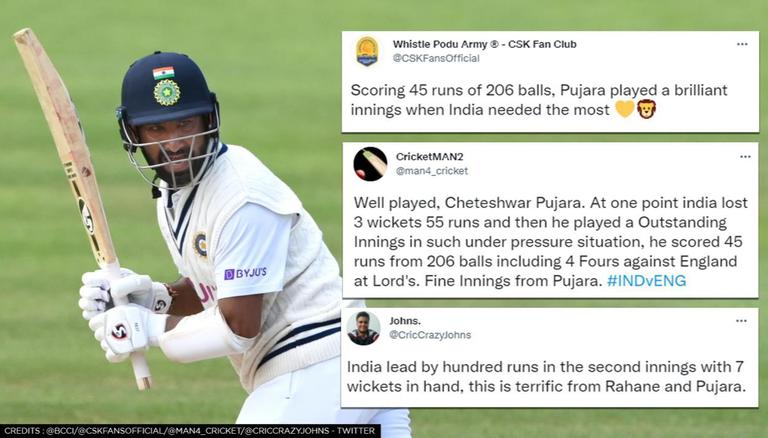 
Team India's experienced Test specialist batsman Cheteshwar Pujara and vice-captain Ajinkya Rahane showcased remarkable determination to frustrate England's bowling attack at a time when the visitors were under immense pressure. Cheteshwar Pujara, who was facing criticism from not only social media and cricket experts, for being too defensive stepped up to the occasion when Team India lost their top three batsmen - Rahul, Rohit, and Virat.

Resuming the innings at 56/3, Pujara showed immense resilience as he reached the 12-run mark after facing a century of deliveries. Pujara, along with Rahane, saw out the first hour rather easily and it was the English bowlers who were put under a bit of pressure by the duo.

In fact, it was Cheteshwar Pujara's 'old-fashioned' Test innings that frustrated the English pace attack. Although Pujara could not reach his half-century, the 33-year-old batsman faced 206 balls. Pujara was dismissed on 45 by Mark Wood when the good length ball surprised him with the extra bounce. Notably, Pujara took 35 balls to score his first run and for that, he was applauded by the spectators. Now, Netizens on social media are lauding Pujara for his fighting knock at Lord's.

READ | 'Technical issues' is what went wrong for Rahane and Pujara at Lord's: VVS Laxman

India lead by hundred runs in the second innings with 7 wickets in hand, this is terrific from Rahane and Pujara.

Apart from all the trolling and fun we made, it looks so good to see Pujara and Rahane amongst the runs that too when India needed them the most to kick in.#ENGvsIND pic.twitter.com/dalv6LOjvc

Scoring 45 runs of 206 balls, Pujara played a brilliant innings when India needed the most 💛🦁

Well played, Cheteshwar Pujara. At one point india lost 3 wickets 55 runs and then he played a Outstanding Innings in such under pressure situation, he scored 45 runs from 206 balls including 4 Fours against England at Lord's. Fine Innings from Pujara. #INDvENG pic.twitter.com/alYW8Tx688

The 100-run partnership comes to an end 😓

Pujara perishes for 45 immediately after hitting Wood for a boundary 😅

Coming back to the game, Team India is leading by 152 runs (at the time of publishing the article), however lost 6 wickets. Moeen Ali dismissed well-settled Ajinkya Rahane on 61 and knocked over Ravindra Jadeja on 3 runs. Earlier, India felt the heat on a sunny Lord's morning as England pacer Mark Wood dismissed the in-form openers before Virat Kohli was caught behind to leave the visitors gasping at 56 for three lunches on day four of the second Test here on Sunday.

The Indian openers KL Rahul and Rohit Sharma, who made up for the middle order's prolonged failure so far in the series, could not bat long on this occasion.

Like skipper Joe Root did for England, the onus was on Virat Kohli to score a big one and bring his team back into the game but he could not do so. Kohli (20 off 31) made a promising start before poking at a wide Sam Curran delivery to leave his team in deeper trouble at the stroke of lunch.