The BCCI on Friday announced a 16-member squad for the upcoming Test series against New Zealand. Fans are not happy with Hanuma Vihari's non-selection. 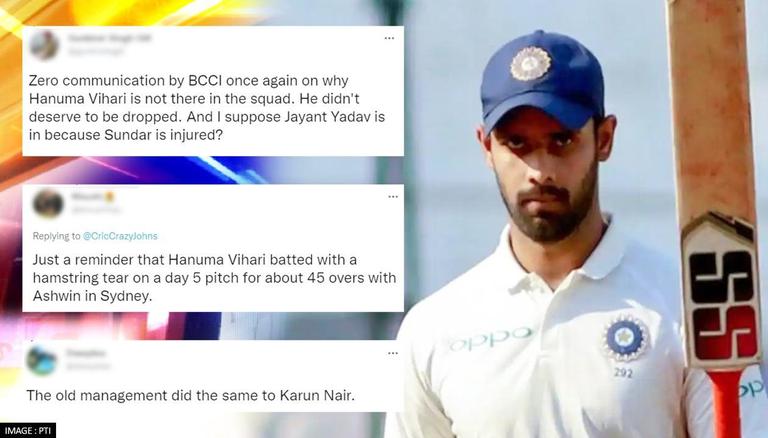 
The Board of Control for Cricket in India (BCCI) on Friday announced a 16-member squad for the upcoming Test series against New Zealand. The two-match Test series is slated to be played between November 25 and December 7. Ajinkya Rahane has been named the captain for the first Test before Virat Kohli returns to assume charge in the second Test match in Mumbai. Rohit Sharma, Mohammed Shami, and Jasprit Bumrah are some of the notable names rested for the series.

Meanwhile, what has caught netizens' attention is the non-selection of Hanuma Vihari. The 28-year-old Hyderabad cricketer, who was a regular part of India's Test set-up since 2018, has been left out of the series against New Zealand without any solid explanation from the BCCI. A couple of experts have suggested on social media that Vihari's exclusion may have been related to a probable injury that he suffered during one of the matches in the Syed Mushtaq Ali Trophy.

Zero communication by BCCI once again on why Hanuma Vihari is not there in the squad. He didn't deserve to be dropped. And I suppose Jayant Yadav is in because Sundar is injured?

But again, these are things which should be cleared up and not left for 'sources' to be revealed.

If Hanuma Vihari is injured then it's fine otherwise it's very unfair on him he did didn't do anything to be dropped.

This was the right time for Hanuma Vihari to make a comeback bt now they dropped him🙄🤦
Very very harsh call on him🥲 pic.twitter.com/vuVb5Q9B3i

If not for any fitness/injury issue, Hanuma Vihari deserves a place in test playing xi as much as anyone in the team#justiceForVihari pic.twitter.com/JvgV3BiCC7

Hanuma Vihari was part of the squad that played the final of the ICC World Test Championship against New Zealand. However, Vihari was not included in the playing XI for the final clash. Vihari was a crucial part of Team India's Test series win over Australia earlier this year as he played a vital inning at SCG to help his side draw the game. Vihari forged an important match-saving 62-run partnership with Ravichandran Ashwin as the duo bated for 43 overs to salvage a draw for India, which subsequently helped them to win their second Test series down under.

As far as the series against Blackcaps is concerned, the first Test match is slated to be held in Kanpur starting November 25. The second game is scheduled to be played in Mumbai between December 3 and December 7. Kohli will be available to captain the side for the second Test in Mumbai. The last time India and New Zealand clashed in a Test match was back in June during the ICC World Test Championship final, which the Kiwis won by 8 wickets.

READ | As BCCI appoints Rahul Dravid as India's coach, here's his U-19, India-A and NCA record