During the Australia W vs India W 2nd T20 encounter, pacer Shikha Pandey took everyone by surprise when he bowled a magical delivery to dismiss Alyssa Healy 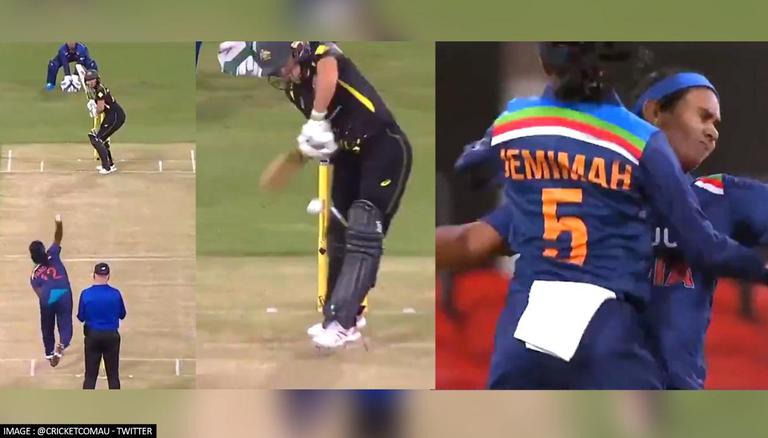 
India W vs Australia W second T20 on Saturday was played at the Metricon Stadium in Queensland's Carrara Oval, in which speedster Shikha Pandey bowled a brilliant in-swing delivery which cleaned the stumps of batter Alyssa Healy. In a pursuit to get one step closer to level the multi-format series, Team India made a brilliant start with Shikha Pandey dismissing Healy for just 4 runs. Shikha Pandey's delivery to dismiss Healy was shared by Cricket Australia on its Twitter handle and in no time the video went viral.

Cricket Australia shared the video on its Twitter handle called Pandey's delivery as 'Ball of the Summer'. Shikha dismissed the Australian opener on the second ball she bowled.

As an opener you expect a good one here and there, but that is ridiculous #AUSvIND https://t.co/hXq6HKnuaA

As soon as the video went viral on social media, former cricketers like Wasim Jaffer, Aakash Pandey lauded the speedster. Wasim Jaffer took to his Twitter handle and shared the slow-motion video of Shikha Pandey's delivery. Lauding her, Kaffer called her delivery as 'Ball of the century'.

Former Cricketer and commentator Aakash Chopra also shared Pandey's video and hailed the speedster in his own unique style saying to keep rocking.

Coming back to India W vs Australia W second T20, Indian bowlers put up a valiant effort with 118 runs to defend before Tahlia McGrath won the battle of nerves at the death, guiding Australia to a four-wicket victory in the second women's T20 International and also clinch the multi-format series. Australia won the ODI series 2-1, drew the Test and now this win in the second T20I  handed them the series.

Batting first, Team India did not start well as both openers Smriti Mandhana and Shafali Verma were dismissed early. Mandhana was dismissed on 1 while Shafali went back to the pavilion after scoring 4 runs. Both openers Smriti Mandhana and Shafali Verma lost their wicket to Tayla Vlaeminck's (2/18) pace. However, Skipper Harmanpreet Kaur and Pooja Vastrakar showcased some fightback still the Australian bowling attack chocked the visitors to 118 runs in 20 overs.

READ | Mandhana lauds Punam Raut for walking off despite given not-out; 'She earned my respect'

While the Indian openers started well, Ashleigh Gardner came into the attack and sent them back to the pavilion in the same over. At one stage India was 55 for 3 and things looked to be going the Australians' way. Then came in Rodrigues who completely turned the innings over its head as she expressed herself really well with the bat. She had good support from Yastika Bhatia before she had to make her way back to the bench. Then, rain played the villain eventually leading the match to be called off.