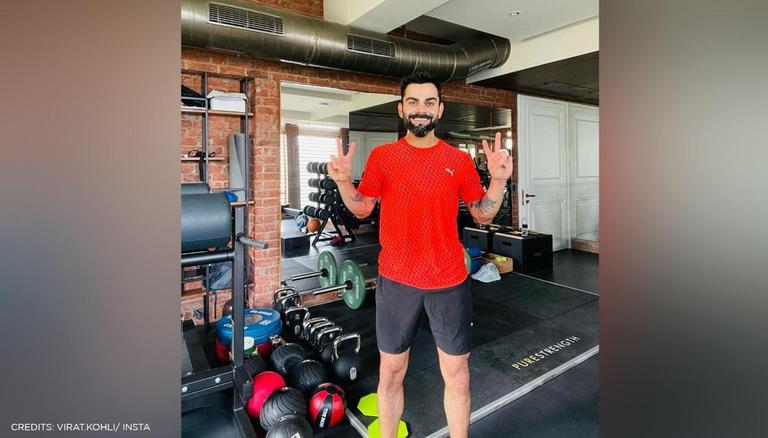 
Team India skipper Virat Kohli has revealed what his diet and quarantine routine looks like during a recent Q&A session on Instagram. Kohli is currently serving his quarantine period in Mumbai with wife Anushka Sharma and daughter Vamika before he flies to the United Kingdom along with his family to participate in the ICC World Test Championship Final and five-matches Test series against England. Here are a few answers -

When a passionate cricket fan had asked Virat Kohli about his routine during quarantine, he said that he trains once a day, and spends time with his family. Kohli also added that it is 'pretty normal' for him.

When another fan asked Virat Kohli about what his diet looks like in quarantine, the Indian captain replied by saying that he consumes a lot of vegetables, some eggs, two cups of coffee, dal, quinoa, lots of spinach, dosas, etc. but all in 'controlled quantities'.

Answering a fan's question on his daily intake i.e. what he eats in a day, Virat Kohli said that his diet includes a lot of simply cooked Indian food and sometimes, Chinese as well and then added that he also enjoys having almonds, protein bar, fruits.

During the same Q&A session, one of the admirers of his game had asked the batting megastar how he is feeling after getting himself vaccinated and also wondered whether 'VK' is having fever or any other side effects and when it came to Virat Kohli's notice, he said that he is having a bit of body ache and slight fever but nothing major though.

In short, Virat Kohli has made it crystal clear that he has not been tested COVID-19 positive and his fans, as well as well-wishers, need not be concerned.

Virat Kohli's physique and athleticism can be largely attributed to the skipper's strict diet and workout sessions. Virat is arguably one of the fittest cricketers and athletes in the world. In fact, when the batting megastar had become India's captain across all three formats in January 2017, he had revealed how difficult it was for him to compromise on his diet and lifestyle initially, but how it eventually helped him a lot on the field, especially while running between the wickets.

The Indian captain during his Instagram live session with former England skipper as well as good friend Kevin Pietersen last year had revealed why he decided to turn vegan in mid-2018.

He also added that it is because of his better half Anushka Sharma that he decided to ditch eating meat and take up a life of a vegetarian himself. The 32-year-old had cited health reasons behind his dietary change. Virat Kohli claimed that the reason mainly was that his body had become acidic by the start of 2018, which could have caused him more fitness and health issues in the future.

Watch this story by Virat Kohli on Instagram before it disappears.
READ | Joe Root begins mind games with both Virat Kohli and Kane Williamson; here is how
READ | Virat Kohli reveals daughter Vamika's name's meaning, why her picture isn't made public
READ | 'Trust and...': Virat Kohli defines his relationship with MS Dhoni in two words
First Published: 30th May, 2021 09:41 IST
SUBSCRIBE TO US