Australian TV presenter Neroli Meadows has expressed her gratitude for her time in the IPL 2021 while thanking the BCCI and Sanjana Ganesan along with others. 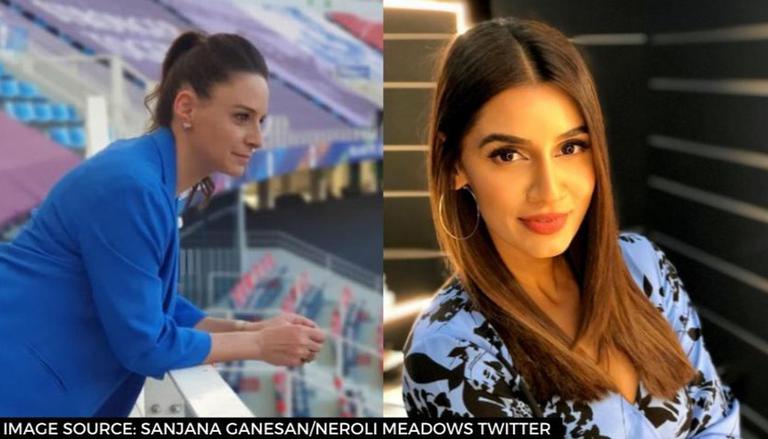 After the IPL 2021 suspension, the Australian players and all the non-playing personnel returned back to Australia after spending their time in the Maldives due to the flight restrictions in Australia. As per the IPL latest news, Australian television presenter, Neroli Meadows has expressed her gratitude for her time in India while thanking the BCCI and colleague Sanjana Ganesan along with others for the warm hospitality she received. Neroli Meadows was a part of the IPL 2021 presenters’ panel for the Star Sports network.

Neroli Meadows expressed her gratitude through an Instagram post after travelling safely back to Australia. Meadows wrote in the caption that she was disheartened by the ongoing situation in India and how she had fallen in love with the kindness and generosity of spirit that the country displayed. She also mentioned her colleagues including Sanjana Ganesan who kept a check on her every day even after everyone was going through their own personal heartaches.

Meadows featured in the BYJU’s Cricket Live program along with Sanjana Ganesan and former Australian cricketer Brett Lee. She also thanked the Sourav Ganguly-led BCCI, CA, Star Sports India and the ACA for playing their part in getting her back home safely. After the IPL suspension, the Sourav Ganguly-led BCCI has assured the safe travel of all the people involved in the IPL. She also thanked the IPL 2021 presenters’ panel for welcoming and supporting her throughout the IPL 2021 journey.  She later urged the Australian people to donate towards the support for the Covid-19 battle in India by suggesting UNICEF Australia's 'India COVID-19 Crisis Appeal' campaign.

As per IPL latest news, Brett Lee was one of the Australians who donated for the Covid-19 support in India. Getting inspired by the Pat Cummins donation to UNICEF Australia's 'India COVID-19 Crisis Appeal', the Brett Lee donation for Covid-19 was 1 Bitcoin to aid Indian hospitals to procure oxygen supplies amid the scarcity. Pat Cummins revealed his donation of USD 50,000 to UNICEF Australia. UNICEF Australia's 'India COVID-19 Crisis Appeal' is an initiative started in partnership with Cricket Australia and the Australian Cricketers' Association (ACA) to help tackle the ongoing crisis in India.

The marriage of Jasprit Bumrah and sports presenter Sanjana Ganesan had taken social media by storm when the couple announced their wedding on March 15 on Instagram. The couple tied the knot in Goa and since then have shared many adorable moments on social media. The Sanjana Ganesan and Jasprit Bumrah wedding picture on Bumrah’s Instagram account had received over 2.9 million likes and over 396,000 comments.

WE RECOMMEND
Sourav Ganguly has one potentially bold surprise in store for fans post IPL suspension
IPL 2021 broadcast chief has special request for Gautam Gambhir, KKR team management
BCCI President Sourav Ganguly reveals the ONE thing he wishes to do in his 'next 3 lives'
Sourav Ganguly has 2 special 2021 gifts for the ever-growing Indian women's cricket team
BCCI postpones 10-team plans for next mega auction after suspension of IPL 2021