Candice shared the picture of Warner's shoes on social media, where she also left a lovely message for her husband, who is playing in COVID-ravaged India.


Australian cricketer David Warner, who is currently captaining the Indian Premier League (IPL) side Sunrisers Hyderabad (SRH), wore personalised shoes last night with names of his wife and daughters imprinted onto them. Warner was spotted wearing shoes that had names of his wife, Candice Warner, and three daughters - Indi, Ivy, and Isla, embroidered onto them. Warner's shoes featured "Candy" written near the toe portion, while names of his daughters, "Ivy, Indi, and Isla" at the back. Candice shared the picture of the shoes on social media, where she also left a lovely message for her husband, who is playing the IPL in COVID-ravaged India. "No matter where in the world you are darling we are always with you," Candice wrote tagging her husband David Warner. 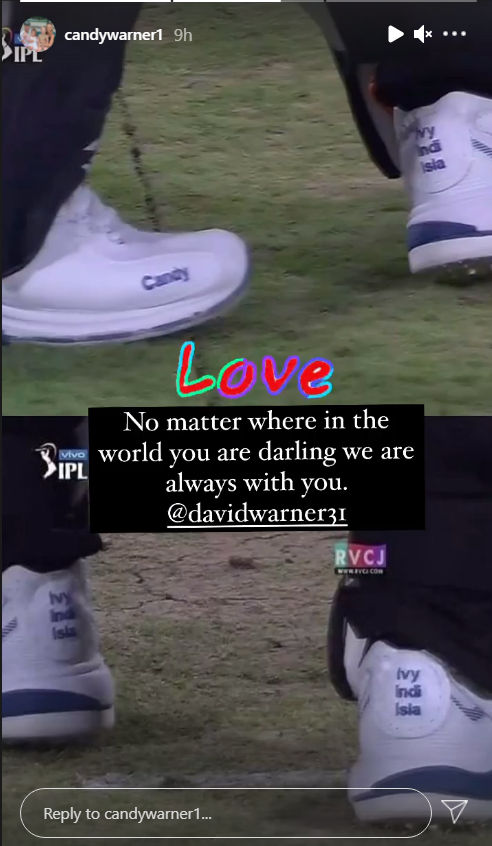 However, this is not the first time when an IPL star or a sporting person has wore personalised shoes during a match. Punjab Kings (PBKS) explosive batsman Chris Gayle was recently seen wearing shoes with his highest Test score '333' and his nickname 'Universe Boss" embroidered onto them. Gayle has worn personalised shoes on several occasions in the past couple of years. Retired footballer David Beckham once wore a pair of shoes with names of his four children embroidered onto them. Beckham wore the shoes during his team LA Galaxy's match in Major League Soccer.

As far as the match is concerned, Warner's team failed to contain Chennai Super Kings as they chased down the target set by Sunrisers Hyderabad quite comfortably. SRH had decided to bat first after winning the toss. Warner and his team posted a total of 171/3 runs in 20 overs on the back of some big scores from the skipper and Manish Pandey. After losing Jonny Bairstow early to Sam Curran, Warner and Pandey forged an important partnership of 106 runs. Warner scored 57 off 55 balls, including 2 maximums and 3 boundaries, while Pandey hit 61 off 46 balls, including 1 six and 5 fours. Kane Williamson and Kedar Jadhav came towards the backend of the first inning and scored a quick 26 and 12 runs respectively to help reach the big total.

However, when Chennai came on to bat in the second inning, the target looked below par as the Men in Yellow chased it down with 9 balls to spare and won by 7 wickets. CSK openers Ruturaj Gaikwad and Faf du Plessis looked in amazing form as they both scored a half-century while trying to chase the total. Gaikwad hit 75 off 44 balls, including 12 boundaries, while Faf scored 38-ball 56 runs, including 6 boundaries and 1 six. Gaikwad and Faf were eventually dismissed by SRH spinner Rashid Khan. Moeen Ali came and scored 15 off 8 deliveries before being dismissed by Khan again. In the end, Ravindra Jadeja and Suresh Raina finished it off for CSK as they scored an unbeaten 7 and 17 respectively. Gaikwad was awarded the player of the match trophy.

Warner took the responsibility upon himself and said his slow inning contributed to the loss. The Sunrisers are not faring well this season as they are currently sitting at the bottom of the points table with 1 win and 5 losses. If the SRH fails to qualify for the playoffs, this will be the first time they will be out before the final stages since their title win in 2016.