IPL 2021: Dinesh Karthik Admits To Breach Of Code Of Conduct; Read Why Was He Reprimanded 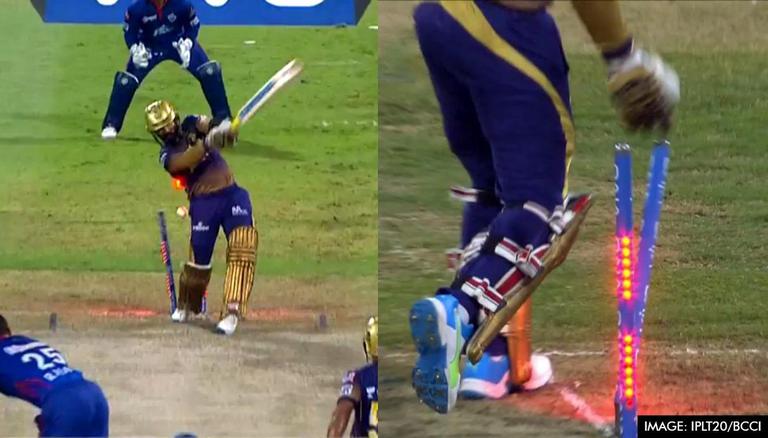 
Kolkata Knight Riders (KKR) wicketkeeper-batsman Dinesh Karthik has been reprimanded for breaching the IPL's code of conduct during the Qualifier 2 match against Delhi Capitals on Wednesday. According to the official statement released by the IPL, Karthik has admitted to the breach in the tournament's code of conduct and has also accepted the sanctions placed against him. The statement did not reveal the exact reason behind the action against Karthik, but the batsman was seen dislodging a stump out of frustration after he was dismissed for a duck by Kagiso Rabada.

The incident occurred on the last ball of the 17th over after a back of a length outside off delivery by Rabada dislodged Karthik's bails for a duck off 3 balls. After the dismissal, Karthik was seen kicking one of the stumps to show frustration before walking off the field. It is not yet clear if the Tamil Nadu cricketer has been reprimanded for the same reason, but it cannot be ruled out either.

"Dinesh Karthik, the Kolkata Knight Riders wicketkeeper-batsman, has been reprimanded for breaching the VIVO Indian Premier League’s (IPL) Code of Conduct during his team’s Qualifier 2 against Delhi Capitals at Sharjah on Wednesday 13th October, 2021. Mr. Karthik admitted to Level 1 offence 2.2 of the IPL’s Code of Conduct and accepted the sanction. For Level 1 breaches of the Code of Conduct, the Match Referee’s decision is final and binding," the official release reads.

As far as the match is concerned, Delhi Capitals almost snatched the victory from KKR's jaw before Rahul Tripathi hit the winning runs for the Men in Purple and helped the side advance to the final. After restricting Delhi Capitals for 135/5 in 20 overs, KKR was looking good to finish the game as both its openers provided a solid start by forging a partnership of 96 runs. However, DC bounced back and picked some quick wickets in the final four overs to put KKR under pressure.

READ | IPL 2021: Have IPL points table-toppers ever failed to win any Qualifier match?

Delhi bowlers managed to dismiss all of KKR's middle-order batsmen for a duck with Avesh Khan, Kagiso Rabada, Anrich Nortje, and Ravichandran Ashwin each taking wickets in their respective overs. Ashwin took two back-to-back wickets in the final over and was on a hat-trick at one point but the dreams of Delhi Capitals were once again crushed as Rahul Tripathi hit a six to help his side finish on the right side of the results. KKR eventually won the thriller by 3 wickets with 1 ball remaining.

READ | DC vs KKR: How many times has a 4th-placed team entered IPL final?