CSK skipper MS Dhoni was seen executing his trademark helicopter shot during a net session in a tribute video posted by the Chennai franchise. Watch here 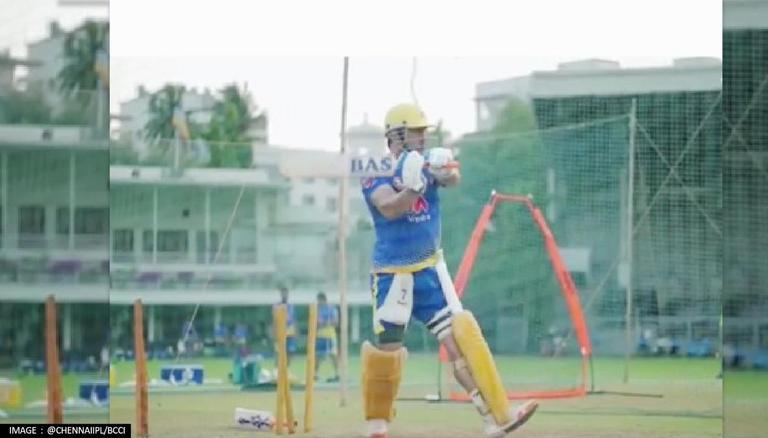 
It seems that 'Captain Cool' MS Dhoni might be in the perfect frame of mind ahead of the IPL 2021 final against Kolkata Knight Riders at the Dubai International Stadium on Friday. The Chennai Super Kings skipper had finished it off in style for CSK in Qualifier 1 against Delhi Capitals with a superb six-ball 18, earlier this week. He would be expected to make his bat do the talking once again as the CSK look forward to bagging their fourth IPL title.

Ahead of the blockbuster grand finale, Mahi was seen sweating it out in the nets and even executed his trademark helicopter shot to perfection.

Ahead of the eagerly awaited CSK vs KKR IPL 2021 final, the 'Yellow Army' has posted a video of all their batters sweating it out in the nets with their official theme song 'Whistle Podu' being played in the background.  MS Dhoni was the centre of attention as he played some aggressive cricketing shots in the nets. However, the perfect execution of his signature helicopter shot is what stood out from the rest.

The Chennai Super Kings vs Kolkata Knight Riders clash will be the second time both teams would be locking horns with each other in an IPL decider. The Gautam Gambhir-led KKR had handed MS Dhoni's CSK a five-wicket defeat in the 2012 edition of the marquee tournament to lift their maiden IPL title.

While the Kolkata Knight Riders would be looking forward to doing the double over the Chennai Super Kings in an IPL final, MSD & Co would be eager to avenge their 2012 final loss and win their first trophy since 2018. Chennai had reached the finals of the 2019 edition but had to be satisfied with a second-place finish after going down to arch-rivals Mumbai Indians in an edge-of-the-seat thriller by just one run.